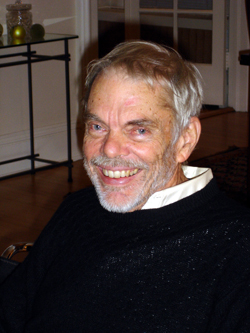 John P. Doering, a longtime faculty member in the Krieger School of Arts and Sciences’ Department of Chemistry, died at home in Baltimore County on Dec. 13 from cardiac arrest. He was 73.

Doering graduated Phi Beta Kappa from Johns Hopkins in 1958 and joined the faculty in 1964 after earning his doctorate at the University of California, Berkeley in 1961 and working for three years at the Los Alamos Scientific Laboratory (now Los Alamos National Laboratory).  He became a full professor in 1970. Four decades of Johns Hopkins freshmen studied in chemistry laboratories under his supervision. He also had undergraduate assistants in his labs and classes, was the thesis adviser of at least 11 doctoral students and worked with numerous postdoctoral fellows.

Doering’s research focused on the collisions of electrons with atoms and molecules in the gas phase that take place in the atmospheres of planets and stars. He was a pioneer in the use of rockets and satellites for measurements of electrons in the Earth’s atmosphere, and his laboratory provided electron spectrometers for three Atmosphere Explorer satellite missions between 1970 and 1983 and measured the photoelectron spectrum of the Earth’s atmosphere to a degree of detail that remains unequaled.

In laboratory experiments, he studied the excitation and ionization of atoms and molecules by electron impact, and their subsequent energy loss. His determination of the rates of excitation of atomic oxygen turned out to be particularly important in atmospheric chemistry modeling. In his last series of experiments, he collaborated with Jack Moore and Michael Copland of the University of Maryland on experiments in which two electrons were ejected from a target atom, making it possible to study in detail how electrons avoid each other in the atom.

Born and raised in the Southwest, Doering was broadly interested in the arts and music, especially opera; played the piano; and was an accomplished painter. He was beloved by his students, colleagues and friends for his wise, insightful sense of humor.

Doering is survived by his wife, Zahava Dudnik Doering, who taught at Johns Hopkins in what is now the Department of Sociology; seven children: Larry Doering; Elana Lubit, a 1981 alumna of the university; Karl Doering; Tamara Brent, a 1983 alumna who received her MD/PhD here in 1991; Don Doering, a 1985 alumnus; Andrea Doering, of the Office of Technology Transfer; and Stefanie Schwenk; his children’s spouses; and 10 grandchildren. A private funeral service was held Dec. 16 in Santa Fe, N.M. The Chemistry Department will honor Doering at a time and place to be announced.

Donations can be made to research at the Johns Hopkins Parkinson’s Disease and Movement Disorders Center (indicate John Doering in the subject line of checks and mail to Zoltan Mari, MD, Johns Hopkins Neurology, 600 N. Wolfe St., Meyer 6-181, Baltimore, MD 21287) or to the American Society for the Preservation of Nature in Israel (go to www.aspni.org and click on Donate Now; send e-mail to robin@aspni
.org indicating that a donation has been made in Doering’s honor).