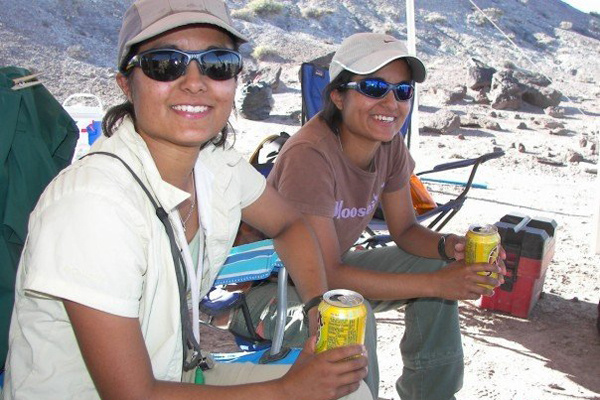 Twin sisters Marina and Celina Suarez in Utah, where they discovered a dinosaur species now named for them. Photo Courtesy Marina Suarez.

A new species of dinosaur discovered near Green River, Utah, has been named for a Johns Hopkins University postdoctoral fellow and her twin sister whose geology work while they were graduate students helped define the new species.

Named Geminiraptor suarezarum for Marina Suarez, the Blaustein Postdoctoral Scholar in Johns Hopkins’ Morton K. Blaustein Department of Earth and Planetary Sciences, and her twin, Celina Suarez, now a postdoctoral student at Boise State University, the six- to seven-foot-long raptorlike dinosaur with large eyes and dexterous claws is thought to have lived about 125 million years ago, according to Utah’s Bureau of Land Management.

The dinosaur’s Latin name means “Twin Predatory Thief of the Suarezes” in honor of the 29-year-old twins, who received their master’s degrees from Temple University and their doctorates from the University of Kansas. They discovered the site where the dinosaur’s remains—primarily an upper jawbone small enough to cradle in your palm—were found seven years ago in the Crystal Geyser Dinosaur Quarry area. Now known as the “Suarez Sisters’ Quarry,” the pit is located within an area of Utah that paleontologists say contains the state’s second-largest collection of dinosaur remains. Geminiraptor suarezarum is the eighth new species of dinosaur identified in Utah this year, according to experts at Utah’s Bureau of Land Management.

“We found the site in 2004, when I was working on my master’s at Temple,” said Marina Suarez, a native of San Antonio. “I was studying the depositional environment of a different dinosaur locality. Part of that research was describing sequences of rocks. I found the site because it was in a steep-sided gully that had good rock exposure. After scrabbling down the gully, I saw bone in the side of the hill, and the more we looked, the more we found.”

Suarez eventually concluded that the deposits of bones indicated that dinosaurs had congregated at that site near a water source, probably a spring. The bones and remnants that the sisters found are now being curated by the College of Eastern Utah’s Prehistoric Museum.

The recently discovered genus is one that is entirely new to science, according to James Kirkland, a paleontologist with the Utah Geological Survey with whom the Suarez twins worked to excavate another quarry, about a mile from the discovery site. Based on the size of Geminiraptor suarezarum’s cranial capacity relative to its body size, paleontologists contend that this meat-eating dinosaur was probably smarter than most, perhaps about as intelligent as a modern-day opossum or roadrunner, Kirkland said. It also had an unusual hollow, inflatable upper jawbone that experts posit may have been used to help the creature vocalize. Geminiraptor suarezarum may have looked something like the Velociraptor featured in the popular 1993 film Jurassic Park, though much smaller.

Having roamed and hunted for prey in Utah 125 million years ago, the newly discovered genus is among the oldest ever identified. Most North American troodontid (birdlike) dinosaurs date from about 72 million to 75 million years ago.

“It’s an honor to have a dinosaur named for the site,” Suarez said. “When I was in the second grade, we had a dinosaur unit, and since then, I’ve never looked back. Finding a dinosaur is something every kid dreams of, so it was really exciting to be the first people to see the remains of animals that have been gone for millions of years.”