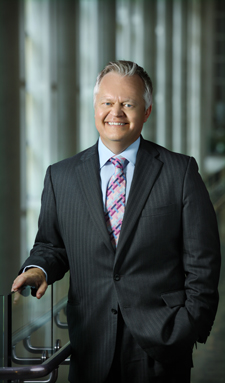 Thompson held this title previously, beginning in 1999, when Johns Hopkins Medicine International was first established, and helped grow the new organization into a highly successful and expansive venture. He left that post in July 2007 to become senior vice president of Johns Hopkins Medicine to oversee the coordination and planning, integration and evolution of its inpatient and outpatient clinical enterprise during a time of accelerated growth. In this role, Thompson helped manage a great expansion of JHM, including the integration of two new hospitals and a host of other new affiliations and relationships.

“Since joining Johns Hopkins in 1994 as administrator of the Department of Anesthesiology and Critical Care Medicine, Steve has distinguished himself in positions of increasing scope, complexity and responsibility, and in each position we have seen abundant evidence of his great success in helping orchestrate the major strategic expansion of Johns Hopkins Medicine,” said Edward D. Miller, dean of the Johns Hopkins School of Medicine and CEO of JHM. “At the same time, we have witnessed explosive growth in our overseas endeavors, which have become increasingly important to JHM’s future,” he said. “So, it’s back to the future for him.”

Ronald R. Peterson, president of The Johns Hopkins Hospital and Health System, said, “We have relied on Steve’s sound judgment and acumen in helping build JHM into a major regional integrated network. We will continue to rely on him in his new role. Our past successes with Johns Hopkins Medicine International have demonstrated that tremendous opportunities exist for us to take our mission to the rest of the world. Given the global village and economy in which we now live, it’s clear that our overseas ventures will become ever more critical to the future health of JHM, as we work toward its overall mission to improve the health of the community and the world.”