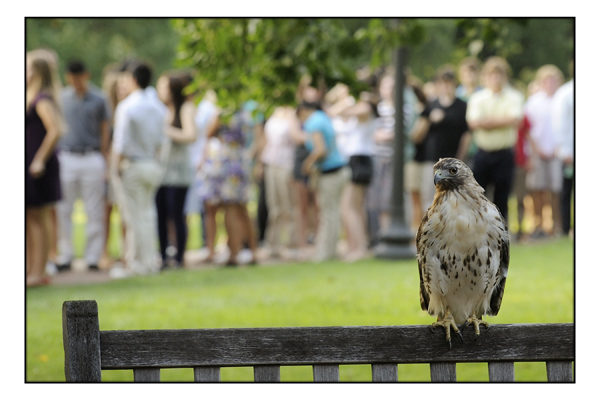 One of Homewood’s two celebrity red-tailed hawks takes a break from the festivities on Convocation Day in 2009. The female of the pair was recently injured when she flew into a window in the MSE Library. Photo: Will Kirk/Homewoodphoto.jhu.edu

You thought our Blue Jays were tough.

An adult female red-tailed hawk—who, along with her mate, has enjoyed a celebrity status on the Homewood campus—is poised to make a full recovery following a calamitous collision with a Milton S. Eisenhower Library window in mid-November. The winged creature has some Johns Hopkins animal enthusiasts to thank.

The bird could be released on campus within weeks, after nearly two months of rehabilitation at a Baltimore County animal clinic.

The hawk slammed into one of the library’s upper windows, located on the Keyser Quadrangle side, just after noon on Nov. 16. Witnesses said that the bird hit the window at full force, leaving a basketball-sized hole in the thick glass.

“I heard a loud thump, and then saw people rushing to the window where glass had fallen,” said Kamilah Cole, the manager of the library’s Cafe Q coffee bar, which is located near the building’s Keyser Quad entrance. “Students stood over the bird, not sure what to do, as feathers fell down around them.”

The animal had plummeted to the library patio and lay motionless for minutes. Homewood Security personnel arrived soon after to ward off people and put up yellow tape.

Chris Falzone, an associate research professor in the Chemistry Department and one of the first to arrive, described the scene as morose.

“The hawk lay flat and was completely unconscious, with glass broken around it. I thought it must be dead,” he said. “Then it started to move, and we could see it breathing.”

Hoen and others speculated that the bird was chasing something, or being chased, and thought that it had a straight shot through the glass to the other side of the library. Many birds, even keen-eyed hawks, can’t see glass until it’s too late. Some birds mistake their reflection for a rival bird.

Daniel Klem Jr., a professor of ornithology at Muhlenberg College and an expert on avian mortality, estimates that 1 billion birds are killed in the United States annually due to window collisions.

Klem said that most birds don’t survive such accidents.

“As to be expected, most die of head trauma or paralysis,” he said. “One out of two is killed outright within a half hour. This bird was lucky.”

Homewood Security notified Tom Wheatley, the university’s carpenter shop supervisor, who has expertise dealing with injured animals. Wheatley, who went through a seven-year falconry apprenticeship, has in the past rescued opossums, birds, snakes and even some bats injured or trapped on campus. Two years ago, he rescued a hawk trapped in the pedestrian bridge over San Martin Drive.

“Some of my co-workers call my workshop animal control,” Wheatley joked. “I’m not exactly the Crocodile Hunter, but I would much rather see animals returned to their habitat alive.”

Wheatley hurried to the scene of the accident and using leather gloves placed the injured bird in a box, so it would remain still, and brought it back to his workshop.

Wheatley decided to take the animal to a friend, Kathy Woods, director of the Phoenix Wildlife Center, a nonprofit clinic that specializes in rehabilitating injured native Maryland wildlife.

Woods said that the animal arrived at her clinic later that day in poor shape.

“The bird was hunched up like a gnome. It did not present like a hawk at all,” said Woods, who previously worked as a cardiac surgery coordinator at The Johns Hopkins Hospital. She founded the Phoenix Wildlife Center in the mid-1990s and left the hospital in 2000 to run the clinic full time.

Woods said that the bird was badly bruised over its entire body, except the beak and neck.

“I’m guessing that at the last second she pulled up to avoid a headfirst collision,” Woods said. “When she came in, she was in a lot of pain and mostly just lay there.”

Woods placed the bird on a regimen of painkillers. During the first month, the bird was kept mostly immobilized in a large stainless steel cage with bumper pads and a mattress pad so that it could not further injure itself. The clinic staff called her “stumpy” because she could not extend her neck.

The animal, who has lived on a diet of water and frozen mice, has since been taken off pain medications and examined by a veterinarian.

“Remarkably, nothing was broken,” Woods said. “This bird was very lucky. It’s amazing that it’s not crippled or dead.”

Red-tailed hawks are one of the most common birds of prey in North America. Most are brown up top and pale below, with a streaked belly and cinnamon-red tail. They commonly hunt rodents, such as mice and squirrels, found in plentiful supply on the Homewood campus.

These birds, once they find a mate, tend to live and hunt in the same area for years. The injured bird has likely lived through several winters on the Homewood campus, Woods said.

Woods said that the animal will soon be brought outside to a large flight cage so it can build up its muscles. She anticipates the animal will be ready for release later this month or in early February.

She wants to release the animal back on the campus before the mating season starts, as hawks have been known to mate for life and Woods doesn’t want the male to find a new mate, thinking its partner has died.

“We certainly don’t want her to lose a spot at Johns Hopkins,” she said. “She might nest there for many years to come.”

The window at the library has since been repaired. The library’s windows will soon be affixed with ultraviolet reflective static decals, which although largely invisible to humans, act as visual noise for birds to deter collision.

University architect Jim Miller, who approved the decals, said that he is not aware of bird decals on any other Homewood campus buildings.

Woods said the bird is currently standing “upright and head up tall” and that she anticipates the animal will make a full recovery.

Wheatley said he’s glad to hear about the optimistic prognosis.