COSMOS-AzTEC3 is roughly 12.6 billion light-years away from Earth. 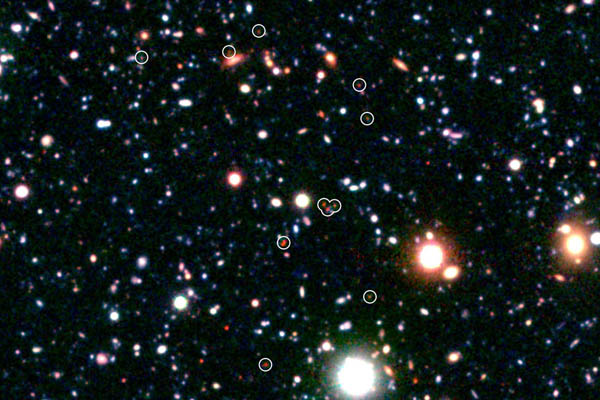 Members of the developing CoSMoS-azteC3 cluster are circled in white in this image taken by Japan’s Subaru telescope atop Mauna Kea in hawaii. Photo: SUBARU/NASA/JPL-CALTECH

A team of astronomers has uncovered a burgeoning galactic metropolis, the most distant known in the early universe. This ancient collection of galaxies presumably grew into a modern galaxy cluster similar to the massive ones seen today.

The developing cluster, named COSMOS-AzTEC3, was discovered and characterized by multiwavelength telescopes, including NASA’s Spitzer, Chandra and Hubble space telescopes, and the ground-based W.M. Keck Observatory and Japan’s Subaru Telescope.

Johannes Staguhn, an associate research scientist at Johns Hopkins’ Center for Astrophysical Sciences in the Krieger School’s Henry A. Rowland Department of Physics and Astronomy, contributed data to uncover the nature of a main cluster member.

Scientists refer to this growing lump of galaxies as a proto-cluster. COSMOS-AzTEC3 is the most distant massive proto-cluster known and also one of the youngest, because it is being seen when the universe itself was young. The cluster is roughly 12.6 billion light-years away from Earth. Our universe is estimated to be 13.7 billion years old. Previously, more mature versions of these clusters had been spotted at 10 billion light-years away.

The astronomers also found that this cluster is buzzing with extreme bursts of star formation and one enormous feeding black hole.

“We think the starbursts and black holes are the seeds of the cluster,” said Peter Capak of NASA’s Spitzer Science Center at the California Institute of Technology. “These seeds will eventually grow into a giant, central galaxy that will dominate the cluster—a trait found in modern-day galaxy clusters.” Capak is first author of a paper appearing in the Jan. 13 issue of the journal Nature.

Most galaxies in our universe are bound together into clusters that dot the cosmic landscape like urban sprawls, usually centered around one old, monstrous galaxy containing a massive black hole. Astronomers thought that primitive versions of these clusters, still forming and clumping together, should exist in the early universe. But locating one proved difficult—until now.

Capak and his colleagues first used the Chandra X-ray Observatory and the United Kingdom’s James Clerk Maxwell Telescope on Mauna Kea, Hawaii, to search for the black holes and bursts of star formation needed to form the massive galaxies at the centers of modern galaxy cities. The astronomers then used the Hubble and Subaru telescopes to estimate the distances to these objects, and to look for higher densities of galaxies around them. Finally, the Keck telescope was used to confirm that these galaxies were at the same distance and part of the same galactic sprawl.

Once the scientists found this lumping of galaxies, they measured the combined mass with the help of Spitzer. At this distance the optical light from stars is shifted, or stretched, to infrared wavelengths that can only be observed in outer space by Spitzer. The lump sum of the mass turned out to be a minimum of 400 billion suns, enough to indicate that the astronomers had indeed uncovered a massive proto-cluster. The Spitzer observations also helped confirm that a massive galaxy at the center of the cluster was forming stars at an impressive rate.

Chandra X-ray observations were used to find and characterize the whopping black hole with a mass of more than 30 million suns. Massive black holes are common in present-day galaxy clusters, but this is the first time a feeding black hole of this heft has been linked to a cluster that is so young.

Finally, the Institut de Radioastronomie Millimetrique’s interferometer telescope in France and 30-meter telescope in Spain, along with the National Radio Astronomy Observatory’s Very Large Array telescope in New Mexico, measured the amount of gas, or fuel for future star formation, in the cluster. The results indicate the cluster will keep growing into a modern city of galaxies.

“It really did take a village of telescopes to nail this cluster,” Capak said. “Observations across the electromagnetic spectrum, from X-ray to millimeter wavelengths, were all critical in providing a comprehensive view of the cluster’s many facets.”

“We were excited to contribute to these studies with our two millimeter bolometer camera, GISMO, which uses the latest superconducting detector technologies developed and built at NASA’s Goddard Space Flight Center,” said Staguhn, the instrument PI and also a scientist at NASA’s Goddard Space Flight Center. “GISMO was built as a pathfinder instrument for our detector technologies, which were developed for suborbital and space applications. Funding from the National Science Foundation enabled us to field this technology at the Institut de Radioastronomie Millimetrique’s 30m telescope, where in the future it will enable more studies of the earliest star-forming galaxies in the universe.”

COSMOS-AzTEC3, located in the constellation Sextans, is named after the region where it was found, called COSMOS after the Cosmic Evolution Survey. AzTEC is the name of the camera used on the James Clerk Maxwell Telescope. This camera is now on its way to the Large Millimeter Telescope located in Mexico’s Puebla state.

Physics and Astronomy at Johns Hopkins