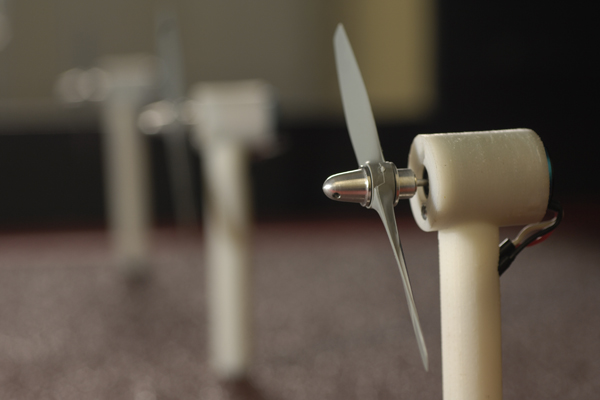 A wind tunnel on the Homewood campus allows researchers to experiment with variables such as the correct spacing of wind turbines. Charles Meneveau and a colleague have devised a new formula for determining the optimal positioning. Photo: Will Kirk/Homewoodphoto.jhu.edu

Large wind farms are being built around the world as a cleaner way to generate electricity, but operators are still searching for the most cost-effective and efficient way to arrange the massive turbines that turn moving air into power.

To help steer wind farm owners in the right direction, Charles Meneveau, a Johns Hopkins fluid mechanics and turbulence expert, working with a colleague in Belgium, has devised a new formula through which the optimal spacing for a large array of turbines can be obtained.

“I believe our results are quite robust,” said Meneveau, who is the Louis Sardella Professor of Mechanical Engineering in the university’s Whiting School of Engineering. “They indicate that large wind farm operators are going to have to space their turbines farther apart.”

The newest wind farms, which can be located on land or offshore, typically use turbines with rotor diameters of about 300 feet. Currently, turbines on these large wind farms are typically spaced about seven rotor diameters apart. The new spacing model developed by Meneveau and Johan Meyers, an assistant professor at Katholieke Universiteit Leuven in Belgium, suggests that placing the wind turbines 15 rotor diameters apart—more than twice as far apart as in the current layouts—results in more cost-efficient power generation.

The study by Meneveau and Meyers was presented recently at a meeting of the American Physical Society Division of Fluid Dynamics.

The research is important because large wind farms—consisting of hundreds or even thousands of turbines—are planned or already operating in the western United States, Europe and China. “The early experience is that they are producing less power than expected,” Meneveau said. “Some of these projects are underperforming.”

Earlier computational models for large wind farm layouts were based on simply adding up what happens in the wakes of single wind turbines, Meneveau said. The new spacing model, he said, takes into account interaction of arrays of turbines with the entire atmospheric wind flow.

Meneveau and Meyers argue that the energy generated in a large wind farm has less to do with horizontal winds and is more dependent on the strong winds that the turbulence created by the tall turbines pulls down from higher up in the atmosphere. Using insights gleaned from high-performance computer simulations as well as from wind tunnel experiments, they determined that in the correct spacing, the turbines alter the landscape in a way that creates turbulence, which stirs the air and helps draw more powerful kinetic energy from higher altitudes.

The experiments were conducted in the university’s wind tunnel, located on the Homewood campus, which uses a large fan to generate a stream of air. Before it enters the testing area, the air passes through an “active grid,” a curtain of perforated plates that rotate randomly and create turbulence so that the air moving through the tunnel more closely resembles real-life wind conditions.

Air currents in the tunnel pass through a series of small three-bladed model wind turbines mounted atop posts, mimicking an array of full-size wind turbines. Data concerning the interaction of the air currents and the model turbines is collected by using a measurement technique called stereo particle-image-velocimetry, which requires a pair of high-resolution digital cameras, smoke and laser pulses.

Further research is needed, Meneveau said, to learn how varying temperatures can affect the generation of power on large wind farms. He has applied for continued funding to conduct such studies.