APL ‘weatherman’ mines data for use by Lab and others 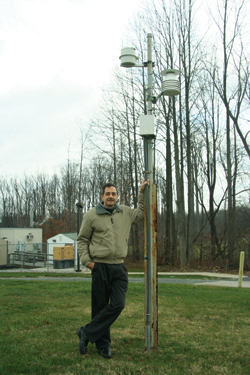 Rich Giannola’s weather interest is more than a backyard hobby. An atmospheric scientist in the Global Engagement Department at the Johns Hopkins Applied Physics Laboratory, he not only operates a manual weather station at home but has also maintained APL’s automated weather station and related website since both were established in 1996.

The APL station, located north of Building 47, collects and archives temperature, wind speed and direction, relative humidity, barometric pressure and rainfall tallies in 15-minute intervals. On Nov. 12, 2010, it collected and stored its half-millionth observation. The data not only provide employees with local temperature and weather conditions but support a range of APL projects, from corroborating effects on electronic equipment used during outdoor experiments to providing engineers with relative solar intensity data that can be correlated with power measurements from solar collectors.

Jim Loesch, supervisor of the Technical Services Department’s Project Management Section, says that weather data, predictions, seasonal norms and trends are crucial information for Laboratory projects. “In the construction business, weather data help us manage risks to project schedules and costs, and ensure that temperature-sensitive activities, like paving or applying fireproofing to steel structures, are done when the environmental conditions are appropriate,” he says. Additionally, snowfall data—manually collected by Giannola—helps TSD staff characterize snow density, and figure out how much of the white stuff a roof can hold.

APL’s weather website (www.jhuapl.edu/weather/main) has a wealth of local, national and international weather resources, including local forecasts for dozens of popular APL travel destinations across the country.

APL’s station is part of WeatherBug, a national network of more than 8,000 weather stations at schools and businesses that integrates weather data into classrooms to help students learn about math and science. Local TV stations, including WMAR-TV2 in Baltimore and WJLA-TV7 in Washington, rely on the network for their observation reports and forecasts.

Through a WeatherBug/National Weather Service partnership, APL’s data could help the Department of Homeland Security and local emergency officials in the event of a terrorism strike or major disaster. Real-time information, such as wind speed and direction and surface temperatures, can help officials know more about the movement of airborne hazards, such as smoke or dangerous chemicals, and make more informed decisions that could save lives.

Giannola continues to answer all non-work-related inquiries on his own time, even as they’ve grown more frequent and unique. “I do what I can to help. I think that’s part of being a professional in this business,” he says. “Often people don’t know where to find data, which might be obvious only to people in the industry.”

He has received requests from as far away as Nova Scotia (for data supporting Canadian military operations). Closer to home, he’s provided rainfall readings for a wetlands project related to the region’s Intercounty Connector; barometric pressure, temperature and rainfall data for a landfill gas-monitoring program at Fort Meade; barometric pressure data to correlate its effect on illnesses such as Parkinson’s disease; and, for a staff member’s school project, data regarding the effects of wind speed on a bicyclist riding on a particular course.

“I’ve been using the data since the station was established,” Loesch says. “Having someone like Rich, who really knows his stuff, is an invaluable resource.”

This article appeared previously in The APL News.