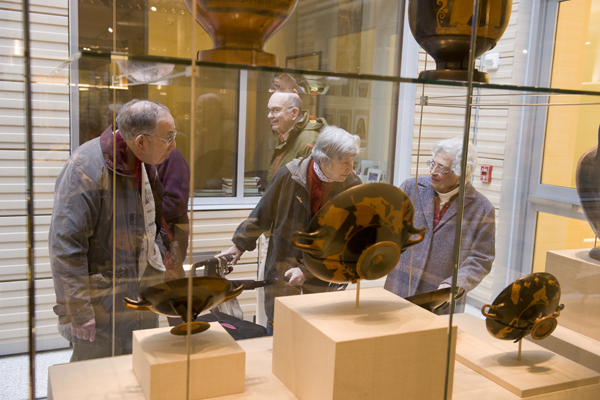 Residents of Roland Park Place were among the first visitors to the Johns Hopkins Archaeological Museum, which reopened to the public in December. Photo: Will Kirk/Homewoodphoto.jhu.edu

Roland Park Place residents were among the first to explore the Homewood campus’s redesigned Johns Hopkins Archaeological Museum, which reopened to the public in December. Thirty-five members of the nearby continuing care retirement community visited last Tuesday, one of whom was Carl Christ, an emeritus professor of economics at Johns Hopkins.

The residents, photographed here viewing the museum’s ancient Greek pottery, were treated to discussions about some of the nearly 700 objects now on display.

“This was a fantastic opportunity to present our new museum and invite our neighboring community to enjoy it as well,” said Sanchita Balachandran, the museum’s curator/conservator and a lecturer in the Krieger School’s Department of Near Eastern Studies. While explaining relics ranging from Etruscan metalwork to Egyptian burial artifacts to the group, Balachandran was reminded of the history of the very museum she curates. “I met one woman who said she remembers seeing the Goucher Mummy when she was in fifth grade, when it was still downtown,” Balachandran said. The mummy was previously on view at the Woman’s College of Baltimore (now Goucher College) and has been on long-term loan to Johns Hopkins since the 1980s.

For more on the museum, including a look at some of its holdings, go to archaeologicalmuseum.jhu.edu.