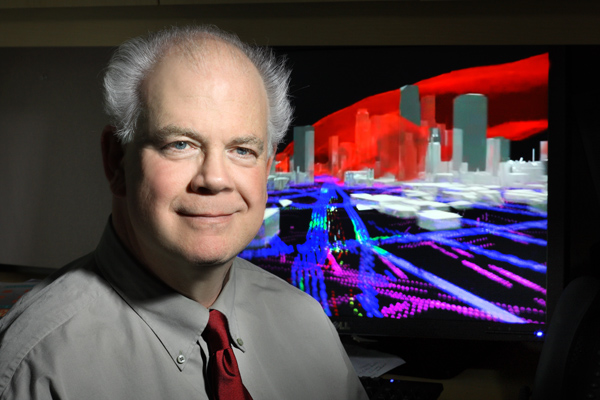 Joshua Epstein, a professor in the Department of Emergency Medicine, is launching an advanced modeling center to develop simulations of chronic diseases, economic turmoil and sudden disasters, such as the toxic chemical cloud in Los Angeles model seen on the computer here. Photo: Keith Weller

What promises to be one of the nation’s most advanced computer simulation and modeling centers is taking shape on the university’s Mount Washington campus.

The Johns Hopkins University Center for Advanced Modeling in the Social, Behavioral and Health Sciences is being launched by Joshua M. Epstein. A former senior fellow at the Brookings Institution, Epstein is an internationally recognized pioneer in the field of “agent-based” simulation modeling, which creates virtual worlds populated by “agents” that act like real people.

“With the launch of this center, Johns Hopkins is firmly planting its flag in the ground and saying we are going to be a mecca for groundbreaking research and applied work in the field of agent-based modeling,” said Epstein, who joined the Johns Hopkins faculty July 1 as a professor in the School of Medicine’s Department of Emergency Medicine. He also holds joint appointments in the School of Arts and Sciences’ Department of Economics and the School of Public Health’s departments of Biostatistics and Environmental Health Sciences.

Epstein, who brings with him multiple federal and other research grants, is the director of the new center.

Agent-based models, or ABMs as they are called by scientists, construct artificial worlds populated by virtual people, or “agents.” These software agents are programmed to respond as people would to real or imagined threats, such as a novel infectious disease outbreak or toxic chemical spill. The simulation models are “highly visual and spatially realistic,” Epstein said, with agents moving between virtual places such as work, school, home and even places far away.

By simulating individual actions and multiple interactions—often driven by fear, poor judgment and imperfect information—Epstein’s simulation models can help predict how complex societies and health systems might respond to a given event and what the ripple effects might be as the scenario unfolds.

If this all sounds like the stuff of war games, that is exactly the point, Epstein said. Given credible modeling of how large numbers of people and complex social systems may react to a disaster or other event, smart planning and response measures can be identified.

Indeed, the center’s primary goal “will be to develop practical, novel scientific solutions” to the many complex medical, social and institutional problems that society faces today, Epstein said.

Gabor Kelen, professor and chair of the Johns Hopkins Department of Emergency Medicine, said that he recruited Epstein to the department because he is a pre-eminent leader in the field of agent-based computational modeling.

Kelen said Epstein also will provide the Johns Hopkins community with a rich new source of advanced learning and research opportunities in a field that holds great potential for developing creative solutions to some of the most challenging social, medical and economic issues faced today by hospitals, government agencies and other large organizations.

In addition, Kelen said, Epstein and the new center will help Johns Hopkins continue to expand its leadership position in the new discipline of disaster health.

The Center for Advanced Modeling will integrate the latest research findings in emergency medicine, disaster health and the behavioral and social sciences to develop sophisticated agent-based models for pandemics, chronic diseases, natural and man-made disasters, civil unrest, economic turbulence and other social challenges that could potentially affect large numbers of people and crucial segments of the economy.

Epstein, whose early studies at Amherst College included music and mathematics, envisions a lively academic environment that draws the brightest minds from around the nation, if not the globe.

“I see this as a place where the top professors and researchers from around the country, indeed the world, will want to come and work on collaborative projects, participate in symposia or develop entirely novel lines of research,” Epstein said. “I want it to be an intensely collaborative environment … which welcomes students and faculty to come and brainstorm, collaborate on papers, attend seminars, come up with brilliant new ideas. I see all kinds of innovative, exciting work coming out of this center, work that pushes important interdisciplinary research forward in a really dynamic way.”

To accommodate the bustle of the center, new space has been designed to foster open, creative campuswide interaction and is now under construction at the Mount Washington campus.

Epstein and Kelen said that an early focus for the Center for Advanced Modeling will involve bringing together a wide range of scholars from across The Johns Hopkins University—including the Bloomberg School of Public Health, School of Medicine, Whiting School of Engineering and Krieger School of Arts and Sciences to work on projects that could lead to key advances in the science of disaster medicine, disaster response, public health preparedness, chronic disease and more.

There’s no reason, he said, that agent-based models can’t be used to forecast how major health phenomena, such as a new pandemic, would affect the national or even global economy. For that matter, he said that he and colleagues in Economics look forward to models that show how financial contagions and panics can spiral into recessions of the sort faced recently in the U.S.

One of the center’s most famous capabilities is the first-of-its-kind planetary-scale agent model, led by Jon Parker, the center’s senior software engineer. This model simulates literally 6.5 billion distinct individuals on a planetary map. You might think of it as Google Earth with an overlay of disease transmission. Epstein and Parker’s planetary model was used by the National Institutes of Health to plan for emerging pathogens, including last year’s swine flu pandemic, and has been featured in Nature.

While Epstein is based in Emergency Medicine, his multiple appointments are intended to “solidify linkages” across the schools and “encourage the engagement of faculty and students at all levels,” CAM’s statement of purpose notes.

Beyond being a focal point for campuswide collaborations, the center has formal affiliations with other cutting-edge modeling and supercomputing centers in the U.S. and abroad. The affiliated centers include the Santa Fe Institute (where Epstein is an external professor), Pittsburgh Supercomputing Center, Virginia Bioinformatics Institute at Virginia Tech, National Center for Computational Engineering at Tennessee and Eidgenossische Technishe Hochschule, or ETH, in Zurich, often referred to as Switzerland’s MIT.

Epstein, who holds a doctorate from the Massachusetts Institute of Technology, is widely considered among a handful of scientific pioneers in the field of agent-based modeling, a distinction for which he was awarded the prestigious NIH Director’s Pioneer Award in 2008 and an honorary doctorate of science from Amherst College in 2010. Along with Robert Axtell, an economist now at George Mason University, Epstein developed the first full agent-based modeling program, dubbed Sugarscape, which simulated social phenomena including social conflict and disease transmission.

In recent years Epstein’s models have expanded dramatically. For example, backed in part by a grant from the National Center for the Study of Preparedness and Catastrophic Event Response, or PACER, at The Johns Hopkins University, Epstein and his team developed the Large-Scale Agent Model for local and national crisis modeling and the Global Agent Model for a world crisis. The programs can execute a scenario in war-game fashion with full U.S. simulations taking but 10 minutes.

Before the H1N1 virus showed up in the United States last year, Epstein used his modeling to show in a short video clip how a new infectious virus would spread rapidly across the U.S. and the entire planet, and how international travel restrictions would mitigate the spread, avoiding morbidity and mortality.

He’s also used his modeling approach to develop gamelike 3-D video simulations that show how virtual agents in crowded urban centers, such as New Orleans and Los Angeles, might react to the sudden threat of a toxic chemical cloud. These include the only models combining fluid dynamics (airborne chemical dispersion) and agent behavior.

In the Los Angeles model, for example, Epstein’s simulation movie shows how agents would react to a slow-moving toxic cloud from an airborne chemical release given known wind patterns and other factors. Epstein’s movie shows that as more and more people get into cars to evacuate the city, traffic throughout the metro area becomes gridlocked, increasing exposures. Better protective strategies—hardening of buildings, shelter in place, adaptive traffic-aware routing, car pooling—can then be optimized using this unique tool. It can be applied to floods, fires, radiologic events and natural disasters, where Epstein’s home department, Emergency Medicine, has already played a crucial humanitarian role. Applications to what department chair Kelen has dubbed “the science of surge” are central to Epstein’s research agenda.

Agent-based models developed at the new center, Epstein says with confidence, will have the potential to revolutionize the social, behavioral and health sciences.