In Fells Point, Cliff Long shows his ‘ghost meter’ to students in the Writing Seminars’ How to Be Scary course, one of 13 academic offerings in the B’More: A Common Freshman Experience program developed four years ago for Intersession. Photo: Will Kirk/Homewoodphoto.jhu.edu

Decked out in black with a Victorian top hat, Cliff Long waved his handy-dandy “ghost meter” at the iron fence in front of the Fell family grave marker on Shakespeare Street in Fells Point. First the device registered nothing, then it emitted a series of lights and clicks.

Long, a guide with Baltimore Ghost Tours, told the nine gathered Johns Hopkins freshmen that a Fell spirit could be nearby.

The small graveyard is a memorial to William Fell—an Englishman who purchased the Baltimore waterfront land in 1726 that would later be named after him—his brother, Edward, and their sons. Legend tells of a well-dressed apparition, perhaps William Fell himself, who walks down Shakespeare Street and fades away as he approaches the grave.

The students—not quite Scooby Doo and Mystery Inc. sleuths—appeared eager to face the paranormal, if only for inspiration’s sake.

The ghost tour of Fells Point came on day three of the Intersession course How to Be Scary: Ghost Stories and the Art of Giving Chills. The course instructor, Lauren Reding, wanted to explore the connection between Baltimore’s history and its haunted tales.

The How to Be Scary course was one of 13 academic offerings in the fourth annual B’More: A Common Freshman Experience, a one-week academic and personal enrichment program with the city as its centerpiece. The popular program, which ran from Sunday, Jan. 23, to Friday, Jan. 28, offered freshmen in the schools of Arts and Sciences and Engineering the opportunity to get to know Baltimore better, make new friends and foster school spirit. 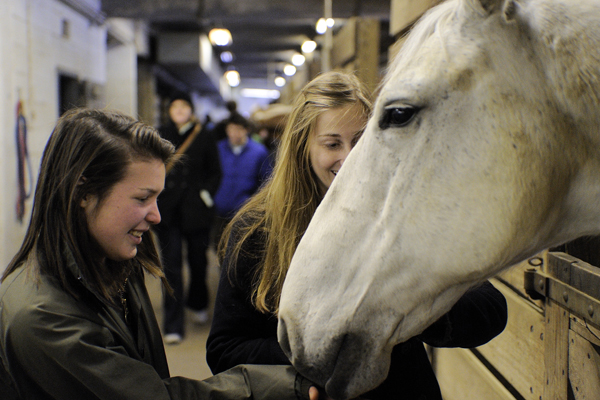 A field trip to the Baltimore Police Mounted Unit was part of the one-week Intersession program focusing on the city. Photo: Will Kirk/Homewoodphoto.jhu.edu

Despite a snowstorm that slashed a full day of activities, more than 160 students took part in this year’s lineup.

Freshmen selected one of 13 one-credit classes that focused on Baltimore. In addition to How to Be Scary, this year’s courses included Junk Food vs. Whole Foods: Access to Food in Baltimore; From Tobacco Wharf to the Star-Spangled Banner; Cleaner, Greener and Sustainable Baltimore: An Inside Look; Spare Change/Make Change: Examining Homelessness in Baltimore; and The Water Taxi Diaries: Travel Writing.

Classes met all day and were divided into a morning classroom lecture session and an afternoon slate of related activities, which included guest speakers, city tours, a concert night, a comedy night and field trips to the Baltimore Police Mounted Unit and the Tulkoff horseradish plant. The 2011 program also featured a panel on the arts led by Craig Hankin, director of the Homewood Art Workshops.

For the How to Be Scary course, students sought to understand how ghost stories contribute to the understanding of our own lives and the past. Through the works of Edgar Allan Poe, Robert Louis Stevenson and Shirley Jackson, students uncovered what makes a good ghost story and put that knowledge to work as they created some supernatural legends about the Homewood campus.

Reding, a graduate student in the Writing Seminars, said that she was surprised to learn that Johns Hopkins had little to no ghost folklore.

“I had expected to hear about Gilman Hall hauntings and the like. I assumed that college campuses, especially Southern ones, would have many ghost stories,” she said. “I thought it was time to create some legends.”

Reding said that the students got creative. They wrote about a murdered roommate turned avenging cyber-hacker, a science professor who experimented on human subjects, and the ethereal doings of Carroll children who lived in Homewood House in the 19th century.

“One of the main ideas, I hope, that they took away was that ghost stories are a thrilling and fantastical medium in which to explore some more concrete, real-world issues that affect our lives: love, war, changing times and, of course, death,” she said.

A new aspect to the B’More program this year was a community service element to all the academic courses.

In the Spare Change/Make Change course, students sorted food at the Maryland Food Bank. Scott Gottbreht, the course’s instructor, wanted to expose his students to a side of Baltimore outside the “safe Johns Hopkins umbrella.”

Students in his course learned about the needs of the homeless as well as national, state and local policy initiatives aimed at alleviating the harsh conditions faced by these individuals.

Gottbreht, a graduate student in the Humanities Center, said that his goals were to inform students about the city and its homeless issue, and expose them to volunteer opportunities. The course’s guest speakers included two former homeless individuals and also Kate Briddell, director of the city’s Homeless Services Program.

“I wanted [the students] to learn about homeless issues from the ground up, and right from the horse’s mouth,” Gottbreht said. “We also went on the Toxic Tour of Baltimore, where students got to see examples of urban decay, like abandoned manufacturing plants and a steel mill yard. I made sure the students got a hands-on experience so they had a much better understanding of inner-city life.”

Another group went to the Waverly Elementary School for an after-school tutorial program. The students in How to Be Scary planned to conduct a story workshop at a Roland Park retirement community but were unable to because of the snowstorm.

Intersession director Jessica Madrigal said that the B’More program steering committee wanted the students to connect with the course subjects in a meaningful way.

“I think the students made a real impact in this one week,” Madrigal said. “Our hope would be that they continue with this or other volunteer work in the years ahead.”

Kate Orgera, a freshman from West Hempstead, N.Y., registered for the B’More program to learn more about her new home.

“I had not seen a lot of Baltimore before this, and I’m still getting used to everything,” said Orgera, who was one of the students in the How to Be Scary course.

Orgera said she enjoyed the ghost tour, even the campy bits, and learning of Baltimore harbor’s pirate-filled past. She looks forward to exploring more of Baltimore, she said, in the months and years to come.