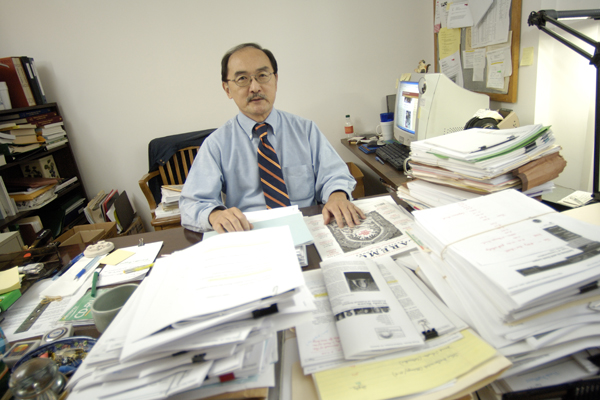 “Henry had retired just this summer,” said Press director Kathleen Keane, “and by all accounts was enjoying himself tremendously. His contributions to publishing and scholarship were many and well-known, and we are all deeply saddened by his death.”

A native of Hawaii, Tom held a doctorate in early modern European history from the University of Chicago. He joined the Johns Hopkins University Press as social sciences editor in 1974, after four years as history and political science editor at the University of Chicago Press. At JHU Press, he acquired in all subfields of history, including U.S. history, European history, history of technology and history of medicine. He diversified the political science list beyond its international relations core and published books in economics, sociology and religious studies. In his 36 years at Johns Hopkins, he was the editor for more than 1,000 books published by the Press.

Tom enjoyed close ties to the Johns Hopkins faculty and looked to them for advice as well as manuscripts. “I don’t think the Press could have built its reputable list in early modern European history,” he once commented, “without the support and help of distinguished History faculty members like Orest Ranum, Robert Forster, Richard Goldthwaite and Richard Kagan. Professors Ranum and Forster helped lay the groundwork for our list in early modern and modern French history. Professor Goldthwaite has advised expertly on excellent work in Italian Renaissance history. And Professor Kagan has been instrumental in identifying important books relating to the rise of Spain and its extensive global influence. All of them have also published with Johns Hopkins.”

Word of Tom’s death brought an outpouring of comments and remembrances from the scholarly and university press communities.

William Sisler, director of Harvard University Press and a former editor at JHU Press, said, “I joined the Johns Hopkins University Press in 1973, and Henry joined the next year, as I recall, so we worked together there for nine years or so. Henry came from the University of Chicago, a no-nonsense place, and Henry was a no-nonsense guy—except when he wasn’t. Yes, he was serious, driven, organized, persnickety, but he was also funny, generous, quick to smile and a man with a life outside the office.”

Edward Muir, the Clarence L. Ver Steeg Professor in the Arts and Sciences at Northwestern University and the author of several JHU Press books, commented, “For a generation, Henry Tom was at the center of Italian Renaissance studies, not just for Americans but for Europeans as well. His commitment derived from a long and distinguished tradition of Renaissance publishing, a tradition that went back, one might say, to Aldus Manutius and the great Venetian publishers of the 16th century, a tradition Henry understood so well. Henry had judgment. Henry had, as Castiglione might have put it, grace. As a scholar and a man, he will be missed by the many authors who knew and worked with him and by the innumerable readers who did not know him but who benefited from his labors. We salute you, Henry.”

At the Press, in addition to his remarkable list of books acquired, Henry Tom may best be remembered as a generous mentor to younger staff, many of whom became acquiring editors at other presses. “Over the years the Press has had the good fortune of hiring some very bright young people with a lot of potential,” he once remarked. “I’ve had the opportunity of working with a number of them, and it’s to the Press’ benefit to develop their talent. I like seeing them grow. I like talking with them about the details of publishing, what makes a book work, how to find the best and brightest authors. I think if scholarly publishing is going to stay fresh, if the Johns Hopkins Press is going to continue publishing important and original books, then we need to develop young men and women who can carry on the Johns Hopkins tradition of innovative publishing.”

Tom is survived by a brother, three sisters and several nieces, all residents of Hawaii and Nevada. Many of them traveled to Baltimore last month for a memorial service at the Corpus Christi Church in Bolton Hill, where donations in Tom’s memory are being accepted.