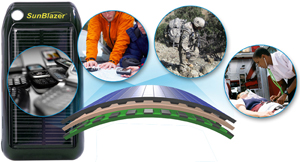 Technology for a solar-powered recharging device developed by APL researchers for satellites is moving to the consumer world. The solar panel can power cell phones, mobile computers and other equipment used by the military and civilians. Courtesy of APL

In the mid-1990s, APL researchers Joe Suter, Binh Le and Ark Lew had a clever idea for a small, thin, flexible device that can convert light to electricity. They also had foresight and—fortunately—a bit of patience.

More than a decade later, their patented invention is close to reaching consumers. In late 2009, APL licensed the technology to Florida-based Genesis Electronics, which incorporated APL’s ideas into a sleek solar recharger called SunBlazer. When attached to a cell phone or related electronic device, SunBlazer’s 2-by-4-inch solar panel will continually draw energy from the sun—or any sufficient light source—and keep the device charged.

“With its power and portability, the SunBlazer is a true breakthrough in the recharging concept and an effective application of renewable energy,” said Edward Dillon, CEO of Genesis Electronics Group.

Conceived primarily for use in satellites, APL’s self-contained power circuit can fit a variety of applications and match the shape of the device it powers. Suter says that’s why the inventors thought it also would have use in laptops or cell phones—yet they could only imagine the world of today, when practically everyone carries a cell phone, mobile computer or digital music player, which all demand more and more power. “It was an invention before its time, before there was a market,” Suter said. “So many people use these devices today, and they’re looking for every bit of power they can find. The demand has caught up to our technology.”

But Suter said he sees benefits beyond extra juice to run the latest apps and downloads. A quick jolt to a comatose phone battery might allow emergency calls from almost anywhere. Military readiness would get a boost from smaller, more efficient devices for powering GPS units, radios and countless other items soldiers carry that need a constant charge.

“APL researchers have the unique opportunity to deliver timely solutions to their sponsors and focus on the future applications of their technologies,” said Kristin Gray, director of APL’s Office of Technology Transfer. “In this case, they invented a solution to a problem that didn’t even exist—yet. That a technology devised in the 1990s could be relevant today tells you a lot about the insight and creativity that go into APL’s cutting-edge work.”