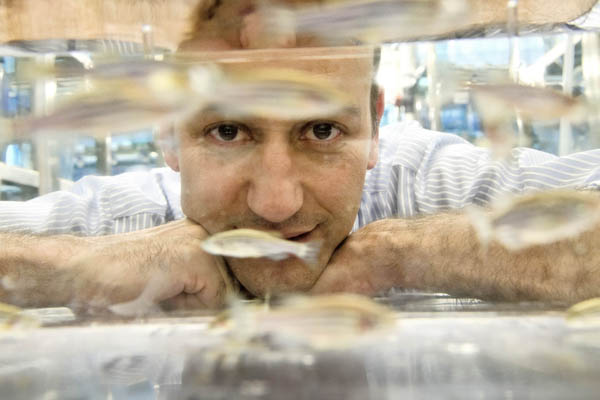 Embryologist and science enthusiast Steve Farber will kick off the spring schedule of the Provost’s Lecture Series, launched last spring to spread the wealth of academic excellence at Johns Hopkins among its campuses.

Farber, a principal investigator with the Carnegie Institution for Science’s Department of Embryology and an adjunct associate professor in the Krieger School of Arts and Sciences’ Department of Biology, will discuss how science outreach can impact education in urban school systems and inspire the next generation of scientists and teachers.

In addition to Farber’s talk, which will take place at the School of Education, the spring lineup includes noted cancer researcher Andrew Feinberg speaking at the Homewood campus and health care finance expert Gerard Anderson at the School of Medicine.

Farber said he believes that scientific outreach can positively impact education and help bridge the achievement gap in the nation’s schools, and serve disadvantaged populations and schools that are typically underresourced in science education.

In 2002, Farber started BioEYES, an international outreach program that utilizes zebrafish to promote science literacy and teach genetics and the experimental process. The program’s mission is to foster an enthusiasm for science, promote interest for future science careers and provide opportunities to learn through a hands-on, student-centered approach. Lecture attendees will get a chance to see live zebrafish to appreciate firsthand the impact of this model system.

Andrew Feinberg, the King Fahd Professor of Molecular Medicine in the School of Medicine, will give a talk on April 25 titled “The Epigenetic Basis of Common Human Disease.” Epigenetics is the study of heritable changes in gene function that occur without a change in the DNA sequence, such as DNA methylation.

Feinberg, director of the Center for Epigenetics at the Johns Hopkins Institute for Basic Biomedical Sciences, said that DNAm is an attractive target for epidemiological study because it is easily measured in archived samples from pre-existing patient cohorts. He said that gene-specific studies have shown that epigenetic alterations are important in cancer and linked to oncogene activation, tumor suppressor gene silencing and chromosomal instability.

The final lecture in the spring series will be given by Gerard Anderson, a professor in the Bloomberg School’s Health Services Research Division with a joint appointment in the School of Medicine. Anderson will give a lecture titled “Cost Containment: Past, Health Reform and Future” from 4:30 to 6:30 p.m. on May 10 in the School of Medicine’s Tilghman Auditorium.

Anderson’s lecture will provide an overview of cost containment efforts over the last 30 years, summarize the provisions of the Accountable Care Act and discuss various options for controlling health care spending in the future.

In addition to his faculty appointment, Anderson serves as director of the Center for Hospital Finance and Management at the Bloomberg School.

Each lecture will be followed by a Q&A segment and reception.

The 2010–2011 academic year is the first full year for the series, which has already featured five speakers representing five divisions. The inaugural lecture, held in April 2010, was given at Homewood by Nobel Prize winner Carol Greider, the Daniel Nathans Professor and director of Molecular Biology and Genetics in the Johns Hopkins Institute for Basic Biomedical Sciences.

The most recent lecture was delivered Jan. 14 by Charles Bennett, a professor in the Krieger School’s Department of Physics and Astronomy, who spoke at the Applied Physics Laboratory about the “Big Bang: Cosmology from WMAP (the Wilkinson Microwave Anisotropy Probe).”

“When we launched the Provost’s Lecture Series last year, our goal was to share the riches of our intellectual and professional talent across Johns Hopkins,” said Provost Lloyd B. Minor. “The outstanding faculty we have featured to date have helped us to realize this goal. I’m very excited about our upcoming speakers, and I know my colleagues will enjoy the wonderful lectures we have planned.”

For more information, go to http://web.jhu.edu/administration/provost/lecture_series
.html. Those planning to attend a lecture are asked to e-mail provostrsvp@jhu.edu.