Their ‘Secrets’ are out at MCC 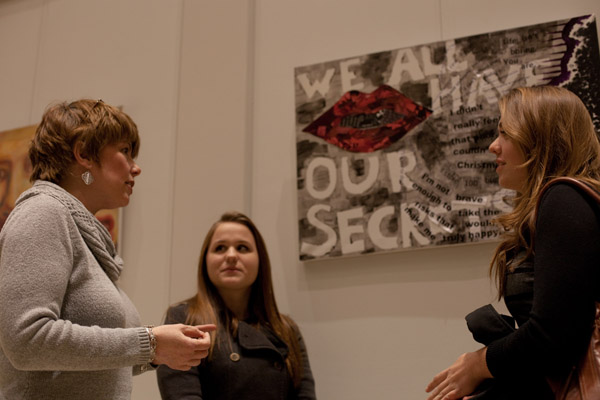 Barbara Crews of the Provost’s Office talks with Alison King and Lara Skibbie of Northwood High School in Silver Spring, Md. Behind King and Skibbie is their piece, ‘The Truth,’ which took third-place honors. Photo: David Chisham

On Feb. 3, the Johns Hopkins Montgomery County Campus held the opening of Secrets, an exhibition of art and photography by Montgomery County high school students. More than 175 students submitted work for the show, which will remain on display through April 17. This was the first year the campus included a photography component to the show, now in its fifth year.

Eric Beatty, director of the Homewood Arts Program, served as a judge for the second year. His co-judge was Potomac, Md.-based artist Bobbi Shulman.

“It was again a pleasure to be a part of this show and to witness such amazing talent,” Beatty said. “Similar to last year, we had a difficult time narrowing the entries down to those that would be displayed. I’m so pleased to see the university sponsoring this great opportunity that I’m sure means a lot to the high school artists.”

This is the fifth year that Plaza Artist Materials and Framing in Rockville, Md., donated 100 canvases to make the show possible.