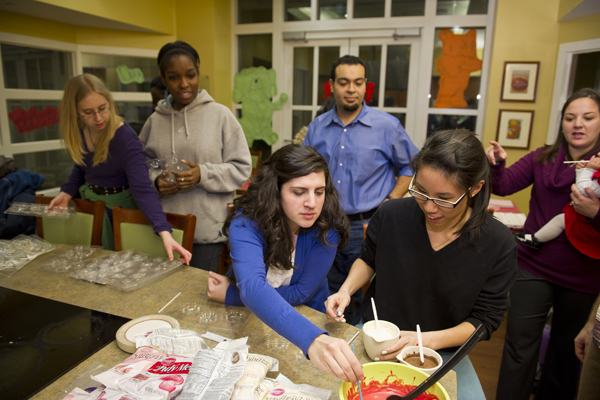 Yassa, an assistant professor in the Department of Psychological and Brain Sciences, wrestled with the treat at the Charles Commons Connections welcome back event on Feb. 1, his first official appearance as the Homewood residence hall’s new faculty in residence.

“Getting caramel off of baby toys, not fun,” Yassa said with a laugh. “I guess it comes with the territory now.”

In his new role, Yassa has a simple directive: Be seen and be social.

Yassa moved into Charles Commons in January with his daughter and wife, Manuella. The couple previously lived in Irvine, Calif., where Yassa finished his doctoral degree.

Yassa, a goateed professor with an easy smile, replaced Amy Lynne Shelton, who had served as Charles Commons Faculty Fellow since the two-building complex opened in September 2006. Charles Commons, a 313,000-square-foot residential and retail facility located in Charles Village, was designed to be a hub of student life on the Homewood campus. It is the only campus building with a faculty in residence.

Yassa coordinates the Charles Commons Connections program—which is open to all undergraduates, not just residents of the building—with the assistance of Craig Rosenblum, the current graduate assistant at Charles Commons, and Corey Michalos, an assistant director with the Office of Residential Life. 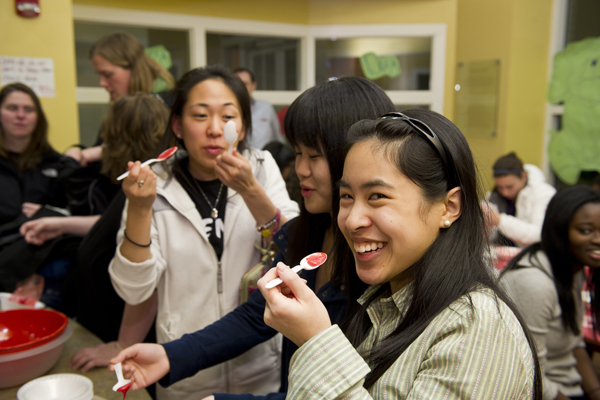 Charles Commons Connections was launched in 2006 by Shelton and Paula Burger, then dean of undergraduate education, to foster community at Johns Hopkins. Throughout the year, the program runs activities that give students opportunities to interact socially with faculty and staff from the schools of Arts and Sciences and Engineering, and take a break from academics.

Yassa said he hopes to build upon the legacy left by his predecessor and colleague.

Shelton, an associate professor in the Department of Psychological and Brain Sciences, moved into the building with her husband, Matt Lindsey, and their 13-month-old son, Ryan. The two became regulars at the Charles Commons Connections events over the past four years. Lindsey, an amateur astronomer, instituted the Stargazing on the Charles Commons Roof event, which is now held once a semester.

Shelton said that the program started off slowly but steadily built up steam. The main goals were to build community and just have fun.

“We wanted faculty and students to talk outside the classroom in an informal setting. The activities all centered on putting people on an even playing field, the more interactive the better,” she said. “We didn’t want a psychology professor, for example, to talk about psychology but more of her day-to-day stuff. I had to twist some arms in the beginning, but once faculty came, they had a great time and we’ve had many repeat visits.”

The program first instituted dinner nights, when faculty would cook their favorite meals, often with the assistance of students. The dinners proved wildly popular and have become a staple. The program would later add pizza making, trivia nights, poker nights, seasonal events, day trips and more. In the past few years, students have gone on trips to see the Body Worlds exhibit at the Maryland Science Center, a show at the France-Merrick Performing Arts Center and even a Broadway play.

In the 2009–2010 academic year, 94 faculty and staff volunteered for the program, which is supported by the Office of Student Life and the Parents Fund.

Last Thursday, faculty and students participated in a candy- and card-making event for Valentine’s Day in the Charles Commons community kitchen.

Tomorrow night, the program will welcome President Ron Daniels for a “fireside chat” at 7 p.m. at the Charles Commons Salon C, located behind Nolan’s on 33rd.

“We think President Daniels will tell the students what he does as president, and what inspired him to come to Johns Hopkins,” Yassa said. “But this is not him at a podium; it’s the president in a much more informal, personal setting. I’m sure the students will ask him about his vision for the university and undergraduate life. We’re really looking forward to it.

The fireside chats were started in 2009 and have so far featured Susan Boswell, dean of student life; Paula Burger; and Michela Gallagher, vice provost for academic affairs. The speakers talk by a cardboard fireplace in an informal setting.

Rosenblum said that the fireside chat and all the programs routinely get a strong turnout. He said 2010 was the program’s most successful year yet in terms of participation.

“Now we have a track record. We learned what worked and what didn’t,” said Rosenblum, who is a graduate student in the Department of Materials Science and Engineering. “But we’re always looking for new ideas. We suggest ideas, but faculty and students can also pitch ideas of what they would like to do.”

Yassa said he’s looking forward to the next two years at Charles Commons and making more connections between faculty and students.

“Interacting is what this is all about,” he said. “We want people to be social and develop relationships through our programs.”