A new home for lacrosse 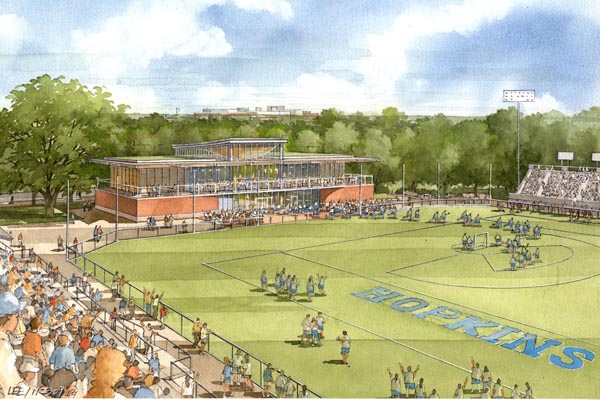 A conceptual drawing of the Cordish Lacrosse Center, as seen from Schelle Pavilion, highlights an abundant use of glass and a second-level patio that can accommodate spectators on game days. It’s scheduled to open after the 2012 season.

For more than 100 years, Homewood Field has been the Yankee Stadium of college lacrosse: a comfortable nest for homestanding Blue Jays, a house of horrors for visiting teams.

But eventually, even Yankee Stadium needs an upgrade.

“We don’t stand on tradition alone,” university President Ronald J. Daniels said in announcing that a new facility, the Cordish Lacrosse Center, will be built at Homewood Field’s east end as a new home for the women’s and 44-time national champion men’s lacrosse programs.

The $10 million 14,000-square-foot facility “will once again set us apart from every other collegiate team in the country,” Daniels said. 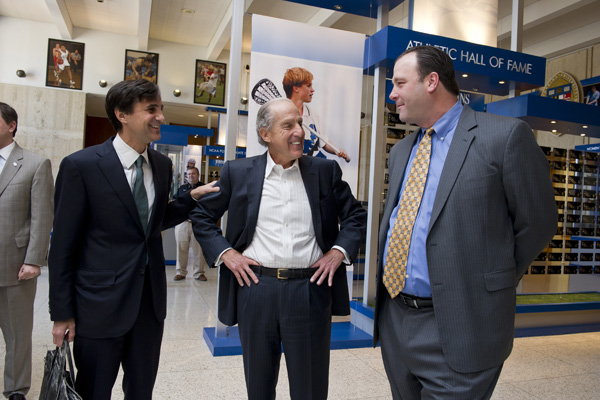 The first facility of its kind, built solely for a university’s lacrosse programs, the Cordish Center will house locker rooms and coaches’ offices for the men’s and women’s teams, a 50-person theater, a conference room, an academic center and a training room. A reception area on the second floor will lead to a patio overlooking the field that can be used for receptions and for game day spectators. On the field level, exhibits will chronicle the history of both programs.

The center will be named for David Cordish, chairman of the Cordish Cos., a 1960 Johns Hopkins graduate, three-year lacrosse player and lead donor to the project. Lacrosse alumni Dennis and David Townsend and Joe Cowan and alumnus Ralph O’Connor were also major contributors.

The building “will give our recruits—from the moment they start dreaming about the Homewood campus—a sense of what lacrosse means at Johns Hopkins,” Daniels said. “It will give thousands of our lacrosse alumni a home to which they can return to reconnect with this sport and this university.”

A ceremonial groundbreaking is planned for halftime of the Johns Hopkins–Navy men’s game on April 23, but construction will begin in earnest after commencement. The teams will occupy the center after the 2012 season.

“Isn’t this fabulous?” women’s coach Janine Tucker said at a news conference last week where artists’ renderings of the building were released to the news media. 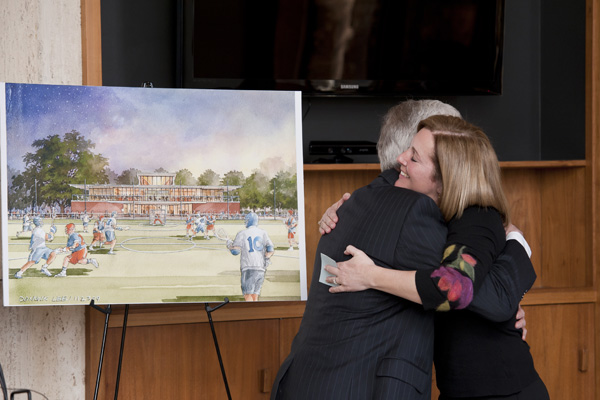 Tucker joined Pietramala in conveying thanks from their teams and alumni to the donors, to President Daniels and to the entire university.

“This transformative facility will have an immediate impact on the experience of our student-athletes, alumni, fans and recruits,” Pietramala said. “The Cordish Lacrosse Center—dedicated solely to our lacrosse programs—clearly demonstrates Johns Hopkins’ unrivaled commitment to men’s and women’s lacrosse.”

Completion of the Cordish Center will also benefit other Johns Hopkins athletes. The NCAA Division I lacrosse squads currently share space in the Newton H. White Athletic Center with the university’s 22 other sports programs. When the lacrosse teams move out, space they now occupy will open up to some of Johns Hopkins’ other teams, which compete with great success in NCAA Division III.