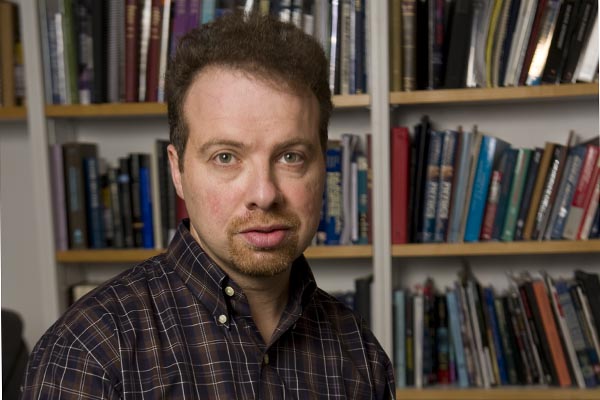 Adam Riess is being recognized for his team’s discovery of ‘dark energy.’ Photo: Will Kirk/Homewoodphoto.jhu.edu

Adam Riess, an astrophysicist at The Johns Hopkins University and the Space Telescope Science Institute, on Friday was awarded the Einstein Medal 2011 by the Albert Einstein Society of Bern, Switzerland. The society’s board of trustees recognized Riess for leadership in the High-z Supernova Search Team’s 1998 discovery that the expansion rate of the universe is accelerating, a phenomenon widely attributed to a mysterious, unexplained “dark energy” filling the universe.

Riess shares this year’s prize with Saul Perlmutter, an astrophysicist at the University of California, Berkeley and the Lawrence Berkeley National Laboratory, whose Supernova Cosmology Project team published similar results shortly after those published by Riess and High-z teammate Brian Schmidt, of the Australian National University. The two teams shared The Peter Gruber Foundation’s 2007 Cosmology Prize—a gold medal and $500,000—for the discovery of dark energy, which Science magazine called “The Breakthrough Discovery of the Year” in 1998. The researchers also shared the 2006 Shaw Prize in astronomy for the same discovery.

Riess will receive a medal at an awards ceremony scheduled to take place in May at the University of Bern.

“The discovery of the acceleration of the universe and its implications for the presence of dark energy suggest we indeed live in an interesting time,” said Riess, a professor of physics and astronomy in the Krieger School of Arts and Sciences at Johns Hopkins. “Although Einstein is considered the intellectual godfather of this discovery, I think even he would have been surprised to see it. As for me, I have been very fortunate to work with tremendous colleagues and have access to powerful facilities.”

The Albert Einstein Society, which is associated with the University of Bern, promotes Einstein’s legacy by annually awarding this medal to individuals who have done outstanding scientific work that is associated in some way with that of the famous scientist, according to Philippe Jetzer, president of the society’s board of trustees. The medal was awarded for the first time in 1979 to British theoretical physicist and author Stephen Hawking.

Riess’ accomplishments have been recognized with a number of other prestigious awards. In 2008, he won a $500,000 John T. and Catherine D. MacArthur Foundation Fellowship Grant, often referred to as a “genius grant.” That same year, he was among the 212 fellows elected to the 228th class of the American Academy of Arts and Sciences. In addition to sharing the 2007 Peter Gruber Foundation’s Cosmology Prize, in 2006 he won the $1 million Shaw Prize, considered by some to be “the Nobel of the East.” In 2009, Riess was elected to the National Academy of Sciences.

Riess led the study for the High-z Supernova Search Team of highly difficult and precise measurements—across 7 billion light-years—that resulted in the remarkable 1998 discovery that many believe has changed astrophysics forever: an accelerated expansion of the universe propelled by dark energy.

“We originally set out to use a special kind of exploding star called supernova to measure how fast the universe was expanding in the past and to compare it to how fast it is expanding now,” Riess said. “We anticipated finding that gravity had slowed the rate of expansion over time. But that’s not what we found.”

Instead, Riess’ team was startled to discern that the rate of expansion was actually speeding up.

“If you tossed a ball into the air and it kept right on going up instead of falling to the ground, you’d be pretty surprised. Well, that’s about how surprised we were to get that result,” Riess said.

These startling observations sent the team back to the idea—first proposed by Albert Einstein but later rejected as his “biggest blunder”—that the so-called vacuum of space might produce a sort of “antigravity” energy that could act repulsively, accelerating the expansion of the universe.

“Suddenly, that idea made sense,” said Riess, who posits that dark energy may account for up to 70 percent of the universe. However, exactly what dark energy is and how it behaves remain among the most pressing questions in astrophysics today.

“Currently, physicists have to choose between those two theories when they calculate something. Dark energy is giving us a peek into how to make those two theories operate together,” Riess said. “Nature somehow must know how to bring these both together, and it is giving us some important clues. It’s up to us to figure out what [those clues] are saying.”