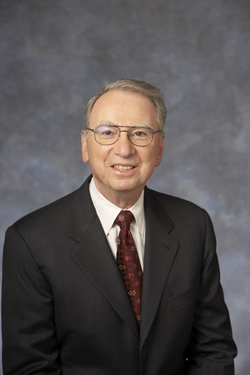 Irwin M. Jacobs, co-founder of Qualcomm, will be the honored guest and speaker on Tuesday, March 1, at a technology management lecture and award program established by a Johns Hopkins graduate and his wife.

This year’s Sydney and Mitzi Blumenthal Lecture and Award for Contributions to Management in Technology program will be held at 4:30 p.m. in the main auditorium, room B17, of Hackerman Hall on the Homewood campus. A reception will follow.

Jacobs will discuss the evolution—since the founding of Qualcomm 25 years ago—of wireless telephone technology, its growth beyond 5 billion subscribers and its expanding impact on machine-to-machine communication, telemedicine, education and virtual reality.

His talk is titled “Innovation Underlying the Exciting World of Wireless: Technology, Devices, Platforms and Applications.”

The Blumenthal Lecture program will open with remarks from university President Ronald J. Daniels, and the speaker will be introduced by Nick Jones, the Benjamin T. Rome Dean of the Whiting School of Engineering. After the speech, Daniels and Jones will present the Blumenthal Award to Jacobs.

The lecture series was conceived by Sydney Blumenthal, who earned an electrical engineering degree at Johns Hopkins in 1937 and went on to become chairman of the Blumenthal-Khan Electrical Limited Partnerships, a contracting company based in Owings Mills, Md.

In 1993, he and his wife, Mitzi, endowed the award and lecture to enrich the educational experience at Johns Hopkins. The lecture allows students to hear distinguished speakers talk about subjects such as business management, entrepreneurship, law and ethics, and how these topics apply to engineering and technology.

Sydney Blumenthal died in 1999, and his widow has continued to support the program, which has brought prominent speakers from business and government to the Homewood campus.

Those who expect to attend Jacobs’ lecture are asked to place a reservation by calling 410-516-8723 or e-mailing engineering@jhu.edu.