Settling in for a ‘fireside chat’ 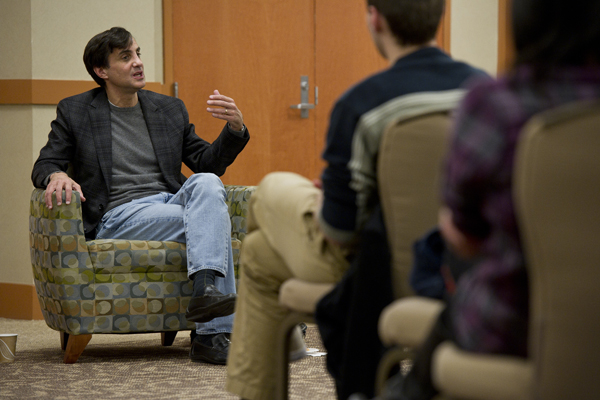 President Ron Daniels has an informal ‘fireside chat’ and answers questions from students in Charles Commons. Photo: Will Kirk/Homewoodphoto.jhu.edu

President Ron Daniels sat down for a “fireside chat” with Homewood undergraduates last week as part of Charles Commons Connections, a program launched in 2006 to foster community at Johns Hopkins. The event was held at the Charles Commons residence hall’s Salon C, located behind the Nolan’s on 33rd restaurant.

In keeping with the tradition of fireside chats, Daniels sat in a cozy chair flanked by a cardboard fireplace brought in for the occasion. After the informal talk, he fielded questions—ranging from the personal to the administrative—from the 65 gathered students.

The fireside chats were started in 2009 and have so far featured Susan Boswell, dean of student life; Paula Burger, then dean of undergraduate education; and Michela Gallagher, vice provost for academic affairs. The next chat could take place later in the spring semester.