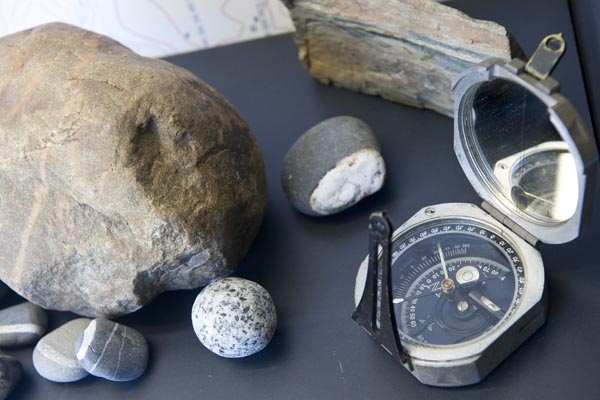 M. Gordon “Reds” Wolman loved stones, especially those found in his beloved rivers and streams. The distinguished and longtime professor in the Department of Geography and Environmental Engineering at Johns Hopkins collected them on his many travels and would often send family and friends on scavenger hunts to find a perfectly round stone.

Stones, rocks and pebbles, which Wolman considered nature’s works of art, could be found on nearly every flat surface in his house.

To honor the memory of Wolman, who passed away on Feb. 24, 2010, and his passion for art and nature, a seminar titled Pebbles and People: Art and Play in the Science of Social Health will be held from 3:30 to 5 p.m. on Thursday in Taylor Auditorium, 110 Maryland Hall, on the Homewood campus.

A reception will follow from 5:30 to 7:30 p.m. in the F. Ross Jones Building of the Mattin Center, site of the installation of The Wolman Pebble Count. The more than 200 pebbles and stones that make up this installation were contributed by his students, colleagues and friends from around the world. The bodies of water represented include the Upper Ganges River in India; the south shore of Lake Superior; Redwood Creek in Humboldt County, Calif.; the Yangtze River near Shiguzhen, China; the Jones Falls in Baltimore; and many others.

The installation—created by Wolman’s daughter Elsa Wolman Katana in collaboration with Royce Faddis, a senior graphic designer in JHU’s Office of Marketing and Creative Services—incorporates personal items of Wolman’s including his field pouch and notebook, a Brunton compass, a hand level and the gravelometer he invented.

The display continues through March 14.

At the time of his death, Wolman was the B. Howell Griswold Jr. Professor of Geography and International Affairs in DoGEE and had been a part of the Johns Hopkins community for more than 60 years.

Thursday’s seminar will feature a talk titled “Geology, Pedology and Art: Can They Relate?” by Rivka Amit, Quaternary geologist and senior research scientist with the Geological Survey of Israel, and a talk titled “Right Brain, Left Brain: Visualization and Aesthetics in Earth Science” by Robert B. Jacobson, a research hydrologist and chief of the river studies branch of the U.S. Geological Survey.