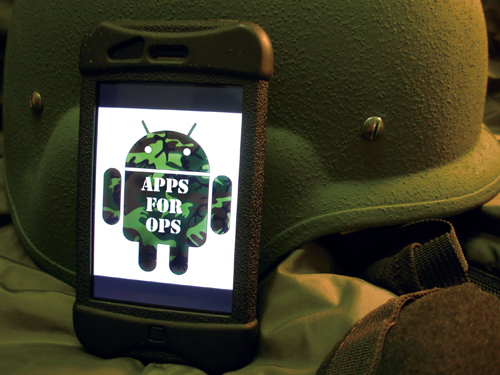 American special operations soldiers gathering critical intelligence and data in hostile territory have found that sometimes the best tool for the job is a civilian device, not a military one. A new favorite of these elite war fighters is the commercial smart phone: a compact, flexible, powerful piece of electronic gear. While the operators have managed to get their smart phones to perform some of the specialized functions they need in the field, there’s still a list of as-yet-unwritten applications they’d like, from instant translation to accurate mapping to fast intelligence analysis.

Creating these applications for operators, or “Apps for Ops,” was the mission facing the 12 members of the 2010 Applied Information Systems Department’s Innovation Challenge. The staffers, all new and younger employees, met with instructors from Fort Bragg, N.C., home of the U.S. Army John F. Kennedy Special Warfare Center and School (aka “The School House”). These volunteers, all veterans of multiple missions across the globe, came to APL to meet with the AISD teams, which were three groups of four staff each.

“Our adversary is fast and agile,” said AISD’s Alison Carr, who has been co-lead for the 2009 and 2010 challenges. “We need to help our soldiers be just as fast and agile. Why not give them something of military grade and quality?”

That sort of critical thinking and approach is the goal of the Innovation Challenge, created in 2008 by then AISD head (now APL director) Ralph Semmel and the AISD Diversity Resource Team, led by Tao Jen. The Innovation Challenge was designed to provide an alternative to the barriers that can form in large departments, and to give young AISD staffers the chance to work across different disciplines and learn things outside of their “comfort zone.”

The 2009 challenge involved key card readers, and met with great success and positive feedback from the participants and AISD leadership. “We all got to do a super scaled-down project manager course, which was very, very useful,” said Paul Velez, leader of the winning 2009 team, who became 2010’s co-lead thanks to his team’s victory. “We also got documentation training from [the Technical Communications Group] for the whole team. It was nice to be able to get that.”

For the 2010 challenge, Army operators described to the APL teams the things they wished they could do better in the field. It required the teams to both listen and do some technical translation.

“They needed to hear what the operator wants,” Carr said, “and also understand the problem he’s trying to solve. We wanted the team to get at the root problem.”

Another issue was usability. “These guys [who would use the apps] are really intelligent and bright,” Carr continued, “but [the Army operators] reminded us that they might be up for 72 hours straight. They’re going to be exhausted and hungry.” That meant they wouldn’t be great at performing complex software operations; they need something that could be run with simple clicks or inputs.

As the teams got to work, it was clear that the goal of getting staffers to veer outside their comfort zones was going to be easily met. “We had hardware people writing software libraries, analysts doing presentations, applied mathematicians programming phones,” Velez said. “We had a real eye to mix the teams and create working relationships, and put people together who don’t work together very often and wouldn’t know one another.”

As development continued, design decisions sometimes required an expert opinion. Thankfully, Carr said, “there are some former operators here at the Lab, and it was great for the teams to be able to bounce some ideas off the guys here as things were developing.”

The teams’ diligence and hard work paid off when the operators returned to APL to view the finished products. “It was great to hear from the operators as we showed them the apps,” Carr said. “They were pleasantly surprised at how much our younger tech people actually ‘heard’ them when they were explaining their needs.”

Several of the applications proved viable enough that they may have life after the Innovation Challenge. “We went to several program managers and said, Do you have a sponsor who might be interested in this application?” Carr said. “We’ve gotten some introductions scheduled, and a few of the projects have been identified as having potential. Because we had program manager support, follow-on support is now available.”

The winning team—Katherine Schulte, Tammara Massey, Derek Pryor and Elizabeth Reilly—received coffee mugs with the Apps for Ops logo and a trip in February to Fort Bragg, where they learned more about the real-world events that led to the operators’ specific requests for custom applications. “They [got] to sit in on training courses and find out where the problems they were addressing came from,” Velez said, “and see exactly how their solutions could literally fit into a real situation.”

The past two Innovation Challenge tasks were suggested by AISD staffers; future challenges will tackle problems from sponsors.

This article appeared previously in The APL News.