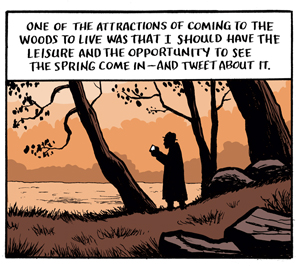 Cartoonist and graphic novelist James Sturm will present a slide talk on his work on Monday, March 7, at The Johns Hopkins University. “Cartooning, Internet Addiction, Religion and Starting a College” will begin at 5:30 p.m. in Room 101 of the Mattin Center’s F. Ross Jones Building, on the Homewood campus. A book signing will follow.

In addition to his groundbreaking books Satchel Paige: Striking Out Jim Crow, James Sturm’s America: God, Gold and Golems, Market Day and the Eisner Award–winning The Fantastic Four: Unstable Molecules, Sturm’s comics, articles and illustrations have appeared in scores of national and regional publications including The Onion, The New York Times and The Chronicle of Higher Education, and on the cover of The New Yorker.

As the director and co-founder of The Center for Cartoon Studies, a two-year MFA program in cartooning in White River Junction, Vt., Sturm is also a noted educator. The Center for Cartoon Studies, the only higher educational institution of its kind in North America, brings together top-tier faculty and the country’s most talented cartoonists to work with the field’s up-and-coming artists.