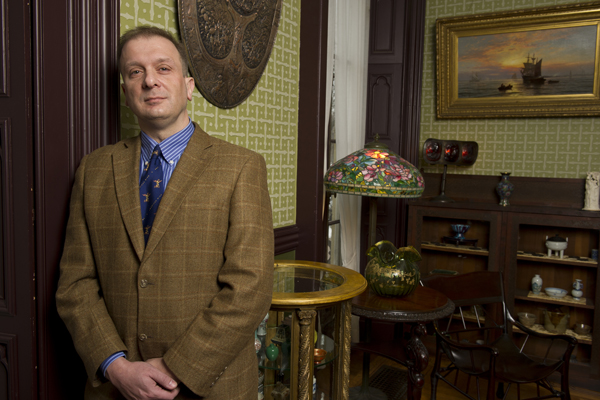 Evergreen director and curator James Archer Abbott in the Gilded Age mansion’s reception room, which has been used as a chapel, print room and office. Restored to its 1880s appearance, the room exhibits a Victorian eclectic aesthetic. Photo: Will Kirk/Homewoodphoto.jhu.edu

Alice and her husband, John Work Garrett, one-time ambassador to Italy, transformed the mansion’s gymnasium into a private theater decorated by Leon Bakst, the famed Russian set and costume designer whom the Garretts met in Paris just before World War I. Alice repurposed another space in the 1930s to feature a single green tub and ample sitting room where she could “hold court” with friends during her bath. Art they collected would continuously rotate on the walls of their home.

The famous Baltimore couple were constantly inspired by new art and trends from their travels to Europe, South America and other parts of the United States.

When James Archer Abbott became director and curator of Evergreen Museum & Library in November 2007, he wanted to honor this legacy of evolution left by Alice Garrett, who died in 1952. “The house was ever-evolving with her mind,” Abbott says. “I wanted Evergreen to personify the ever-changing palette that Alice Garrett had.”

This eclectic and transformational spirit will be on full display this spring, as Evergreen will host myriad events from March to May.

The spring season at Evergreen kicks off this Sunday, March 6, with Spring Exhibitions Opening Celebration, to be held from 1 to 4 p.m. The event marks the opening of two new Evergreen exhibitions, Scott Sedar: Triumph and Slavery and The Art of Diplomacy: The Garretts in Rome.

The current Evergreen artist in residence, Scott Sedar is a Washington, D.C.-based performing and visual artist. His exhibition, which will run from March 6 to May 29, was inspired by John Work Garrett’s monograph on Italian art, Trionfi e Schiavitu (Triumph and Slavery). Sedar spent his 2010 residency exploring themes of triumph and slavery as they relate to art subjects, artists and the lives of the Garretts, and developing a site-specific theatrical/art installation event.

In two back-to-back performances on March 18 and 19, Sedar will re-create a fanciful 1920s theater evening, a distant relation to the social triumphs hosted by the Garretts in Evergreen’s Bakst Theatre. Unlike Mrs. Garrett’s performances, Sedar’s parody will evoke local and European history through the use of caricature, monologues, songs and audience participation. As a prop, Sedar will make use of a Bausch & Lomb “Magic Lantern” Balopticon. His collection of such machines, along with self-painted glass slides and paintings, will make up the art installation that coincides with the performances.

The Art of Diplomacy: The Garretts in Rome, which runs through May 29, is a student-curated show that explores how the Garretts used their status within Roman society to further an exchange between the art worlds of the two nations, and the temporary relocation of their celebrated art collection to the American Embassy in Rome, which unofficially became known as Evergreen East.

The Garretts counted Rome as a second home between 1929 and 1933, when John Garrett served as the United States ambassador to Italy. On display will be Mrs. Garrett’s detailed scrapbooks, key official papers of the ambassador, reviews of the couple’s efforts to celebrate American art with a new audience and examples of Italian art acquired by the Garretts during their time abroad, including works from the 1930 Venice Biennale.

The exhibition is organized by 2010 Evergreen Museum & Library student curator Courtney “Kit” Harris, a senior majoring in both international studies and the history of art, with a minor in the Program in Museums and Society, in the Krieger School of Arts and Sciences. Harris will present a talk about her exhibition at the March 6 opening celebration.

In keeping with the Garretts’ other great love—music—Evergreen’s spring series also includes concerts by the Edmar Castaneda Quartet on March 12 and violinist Hahn-Bin on April 16. A protege of the famed Itzhak Perlman, the 23-year-old South Korean violinist has won critical acclaim for his “extraordinary, intelligent and beautiful performances,” raved The Washington Post.

Another notable event this spring is the new Edible Evergreen: Kitchen Garden Series with Chef John Shields. Beginning in March and continuing into October, Evergreen will host a five-part kitchen garden series presented by Shields and his restaurant, Gertrude’s at the Baltimore Museum of Art. The series, which will highlight three seasons of sustainable growing and preparing fresh organic produce, includes gardening workshops, cooking demonstrations, a chef’s tour of the 32nd Street Farmers’ Market in Waverly and a fall harvest luncheon at Gertrude’s. Participants will receive printed material on home kitchen garden planning and growing techniques, and recipes incorporating the featured crops.

Evergreen’s fourth annual The House Beautiful Lecture Series will run from March 30 to May 18. The series explores decor from the perspectives of the iconic tastemaker Madeleine Castaing, the contemporary design world and the museum. It includes a visual tutorial on the mansion’s rooms and a discussion of Castaing, one of the most influential players in the mid-century melding of 18th-century Bourbon elegance and modern living.

“There isn’t a more eccentric or finer example of the personal dream house than Evergreen,” Abbott says. “It seemed like the perfect fit to have an annual series that could bring in scholars, museum curators and designers to talk about the evolution of design. It’s not stuffy; it’s like you’re coming into the residence of the ambassador and Mrs. Garrett. It’s very personal, and that is the intent of Evergreen. We are not the Walters [Art Museum] or the BMA; we are a residence and also a museum.”

Abbott says that the Edible Evergreen series capitalizes on the largest object at Evergreen, its lush landscape. He says the series also celebrates the past, when some of the finest chefs and gardeners in Baltimore would apply their art in the Garretts’ home. Edible Evergreen will literally take participants from the planting of seeds to the canning of the produce.

“That is part of Evergreen and part of its purpose,” Abbott says. “It’s not a stagnant museum. It’s not the museum where you experience everything behind barriers or from behind glass. You actually can invest in the landscape and be a part of it. Evergreen is used as learning tool, which was the intent of Ambassador John Garrett when he made the gift to Johns Hopkins University.”

On June 26, 1942, John Work Garrett died and left Evergreen and all of his collections to Johns Hopkins University, which had played an important role in his family’s cultural and social life for two generations.

Surrounded by Italianate gardens, Evergreen Museum & Library houses a collection of fine and decorative arts, rare books and manuscripts assembled by two generations of Baltimore’s Garrett family, who made their fortune from the B&O Railroad, and has become a vibrant, inspirational venue for contemporary artists. The collection counts among its many treasures post-Impressionist paintings, Chinese porcelain, Japanese lacquerware and one of the country’s largest private collections of Louis Comfort Tiffany art glass.

Since Abbott became curator, Evergreen has opened up three rooms previously closed to visitors and expanded access to collections, which are constantly rotating.

“You see something fresh and new and different each time you come to Evergreen,” he says. “Evergreen can do things that other museums can’t. We can be more spontaneous and take chances, such as bringing in undiscovered artists. We can take over a space, reinvent it and then, before you know it, it’s gone.”

For information on tours and a full list of Evergreen events to see before they disappear, go to www.museums.jhu.edu.