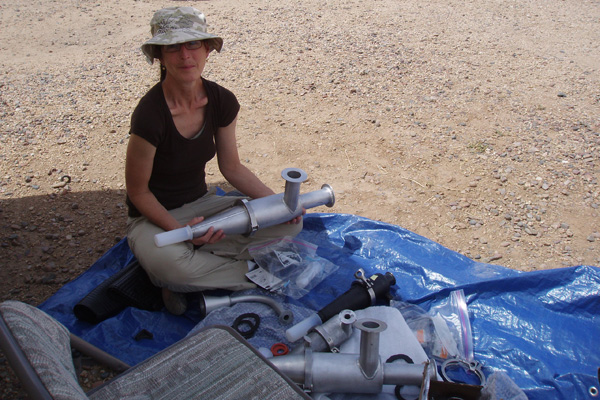 Alison Geyh, an associate professor at the Johns Hopkins Bloomberg School of Public Health, died Feb. 20 after a lengthy battle with cancer. She was 52.

Geyh joined the Department of Environmental Health Sciences in 2000 and built an international reputation with her work on air pollution, in which she applied her skills as a chemist to study the impact of air pollution on health. Geyh was widely known for her research on the health of cleanup workers at the site of the Sept. 11, 2001, attack. “The Bloomberg School has lost a beloved friend and colleague,” said Dean Michael J. Klag in a letter to the school community. “Far beyond her professional accomplishments, Alison will be dearly remembered as a treasured friend, colleague and mentor.”

In addition to her deep commitment to research, teaching and mentoring, family and friends know her for her passions for cycling, cooking, art and dance.

“She was a chemist by training, and she excelled at taking an idea and making it happen scientifically,” Patrick Breysse, a professor in Environmental Health Sciences, told The Baltimore Sun. “She carried herself like a dancer. She was rigid in her posture and was personally intense.”

Breysse told The Sun that after the attack on the World Trade Center, Geyh came to him and said, ‘I am going to New York.’ She literally got in a car and started driving.”

Geyh was one of the first health researchers at the site, where she worked with a team of her students. Worried about how the air pollution would affect workers involved with the cleanup, she and colleagues collaborated with the International Brotherhood of Teamsters to conduct an extensive air quality and health assessment of truck drivers at the site. Her research findings, along with results from other studies, provide a strong justification for ongoing medical monitoring of cleanup workers, as was discussed in a 2007 New England Journal of Medicine article co-authored by Geyh.

More recently, Geyh was a principal investigator on a large EPA-funded research program to evaluate how the chemical composition of particulate matter air pollution can impact human health. As part of this study, she led a team of scientists in an eight-city air-sampling campaign to characterize differences in particulate matter composition across the United States. Results of this research are still pending. She also was collaborating on a study of indoor air pollution exposure from biomass cooking in Nepal.

A sought-after mentor and excellent classroom teacher, Geyh was a 2006 and 2010 recipient of the Advising Mentoring and Teaching Recognition Award sponsored by the student assembly at the Bloomberg School of Public Health.

Alison Daniel was born in Germany, where her father was on assignment in the military, and raised in Anaheim, Calif., where as a teenager she was a “Cinderella dancer” in the Disneyland Electric Light Parade. In 1976, she moved to New York City, where she performed ballet professionally for a number of years before entering Columbia University. There she earned her bachelor’s degree in chemistry and met her future husband, Edward Geyh. They married in 1986 and moved to Massachusetts, where she earned her doctorate in physical organic chemistry at Brandeis University and did postdoctoral work at Harvard University.

Geyh’s family said that she will be remembered for her fierce commitment to her work, her grace and athleticism, her dignity and humility, her remarkable ability to mobilize people to get things done, her unwavering sense of ethics and her deep love for her family, colleagues, students and friends.

She is survived by her husband; her sister, Christine Daniel, and her partner, Cecily Peterson; her father, Richard Daniel, and his wife, Jinny; Edward’s sister, Paula Geyh; and her two cats, Pixie and Jackie.

A gathering of friends and family was held Feb. 26 at the Mount Washington Conference Center.