Lens on JHU and Baltimore 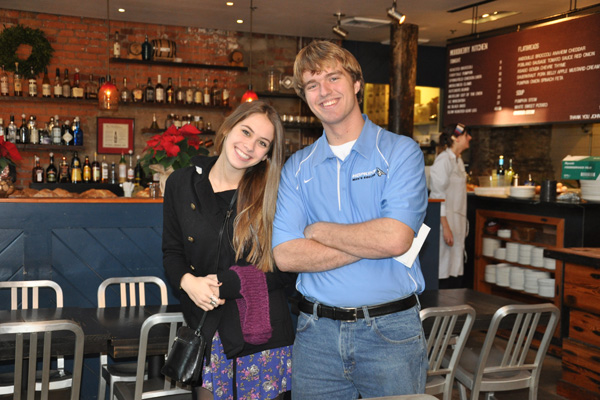 In the most recent episode of Learn More, See More, B’More, hosts Lucie Fink and Noah Guiberson race up Woodberry Kitchen’s steps to the upper level of the popular Hampden-area restaurant.

Once seated, the cheerful pair ponder the eclectic menu a moment before Fink pipes up. “Have you decided what you want yet?” she asks.

“No. This is harder than the neuro final,” jokes Guiberson. Fink, hands on head, laughs and agrees.

Enter Woodberry manager Corey Polyoka to the rescue. To help them decide what to eat, Polyoka offers a tour of the kitchen and a meet-and-greet with the restaurant staff. They’ll even get a chance to help the pastry chef make a cake. Rachel Ray, eat your heart out.

You won’t find this show on the Food Network or Travel Channel but rather the website of the Johns Hopkins University’s Office of Undergraduate Admissions.

The Woodberry Kitchen episode is one of many videos—all written, produced and directed by students—created specifically for Admissions’ Web presence.

In September 2010, the Office of Undergraduate Admissions posted an ad looking for student videographers. The intent was to enhance its recently redesigned website with professional-looking videos that promote life at Johns Hopkins and in Baltimore.

The concept of the videographer positions came from Maggie Kennedy and Shelly Placek, both with Undergraduate Admissions.

Placek, a communications specialist, said that they also saw it as an opportunity for students to get real-world video production experience. 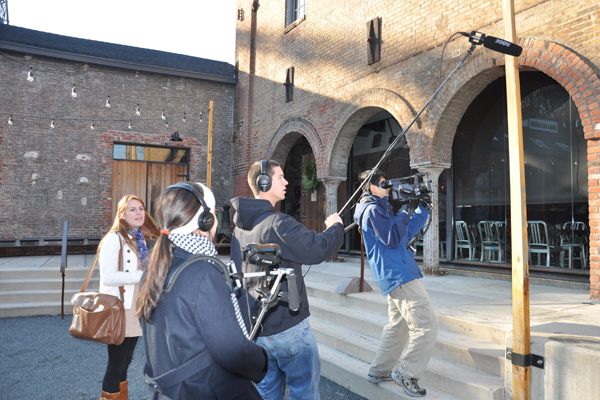 Lauren Carney, a coordinator of the ‘Learn More’ series, and videographers Shayna Bordy, John Belanger and Peter Bai get ready to film a segment outside Woodberry Kitchen. Photo: Will Kirk/Homewoodphoto.jhu.edu

The students started shooting right away and posted their first videos in October.

They began with a This Month at Hopkins feature in which the students show a sampling of activities taking place on and around the Homewood campus, such as concerts, classes, sporting events, recreational fun and more. The videos, overdubbed with music, typically feature four or five events with snippets of random scenes, such as students throwing a Frisbee or working on a paper in the library.

Then the students moved on to features, such as ones on campus security and the university’s Quidditch team, based on the fictional sport in the Harry Potter series. They also shot dorm-room tours, filmed MTV Cribs–style

In conjunction with the Hopkins Interactive technology team, the videographers have worked on Learn More, See More, B’More, a cable TV–like series that will take viewers to must-see destinations in Baltimore. Next month, the website will show an episode shot at the National Aquarium.

The series was created by Fink, a freshman Writing Seminars major and Hopkins Interactive member, who based the idea on Globe Trekker, the award-winning TV series on PBS. The first episode was about winter at Johns Hopkins and featured two brilliant unrehearsed comic moments from President Ron Daniels lighting an outdoor menorah.

Fink, an unabashed fan of reality TV, said that she’s having a blast with the series.

“It’s a lot of fun. We get to show places to prospective students and their parents that make Baltimore look really great and a fun place to come to,” said Fink, who displays a natural on-screen chemistry with her co-host, Guiberson, also a freshman. The two particularly ham it up for the title credits, a fast-moving montage shot at various spots in Baltimore’s Inner Harbor.

“Noah and Lucie are awesome hosts. They are really funny and cute,” Placek said.

Fink said that the plan is to shoot one Learn More, See More, B’More episode a month for the next four years, until she graduates.

The Office of Undergraduate Admissions for the Homewood schools launched Hopkins Interactive in December 2005 to offer a view of JHU from the inside out. The centerpiece of the site is a collection of blogs in which current Arts and Sciences and Engineering students document their lives here, everything from the classroom experience to the weekend scene in Baltimore. The site also features message boards, student profiles and videos.

Daniel Creasy, associate director of Undergraduate Admissions, was the mastermind behind Hopkins Interactive, and his technology team has worked hand in hand with the student videographers.

The Admissions videos have been a hit, generating thousands of views, Placek said.

“The cool thing about the videos is that most of the ideas come right from the students, and they do all the work,” Placek said. “They make the contacts, write the scripts, shoot and edit the video. They bring a lot to the table.”

Shayna Bordy, a senior film and media studies major, edited the Woodberry episode and shot its black-and-white footage. Bordy, who hopes to get into television or movie production after Johns Hopkins, said that she had the Food Network series Diners, Drive-ins and Dives in mind while filming.

With all the videos, Bordy said that she wants other students to know there is life outside the Milton S. Eisenhower Library.

To see the Woodberry Kitchen episode and the other student videos, go to http://apply.jhu.edu.