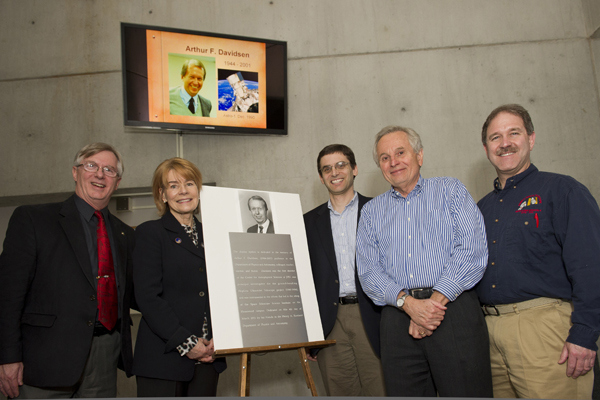 Sixteen years ago, on March 2, 1995, the Astro-2 space shuttle mission—carrying not only the Hopkins Ultraviolet Telescope but also Johns Hopkins payload specialist Sam Durrance and mission specialist John Grunsfeld on his first flight—launched from the Kennedy Space Center in Florida on a two-week dedicated astronomy mission.

Last Friday, some 35 members of that space mission team gathered at the Bloomberg Center for Physics and Astronomy on the university’s Homewood campus for an anniversary luncheon and the dedication of a new educational and informational display system named in honor of the late Arthur F. Davidsen, the Johns Hopkins astrophysicist and professor who was principal investigator for the HUT project. Davidsen died in 2001 at the age of 57.

Located in the Bloomberg Center near Schafler Auditorium, and paid for by the Henry A. Rowland Department of Physics and Astronomy, the new 55-inch flat screen display will feature astronomy and physics content of general interest, providing “a dynamic and engaging element to the lobby,” according to Bill Blair, an ex-HUT team member and research professor in Physics and Astronomy, who organized the event.

Grunsfeld, who later flew on three shuttle missions to service the Hubble Space Telescope and is now deputy director of the Space Telescope Science Institute and a research professor at Johns Hopkins, spoke briefly at the dedication, along with Professor Warren Moos and Blair. Davidsen’s widow, Frauke Davidsen, sponsored the luncheon and was present for the dedication.