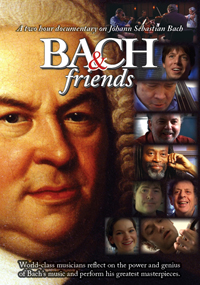 In celebration of J.S. Bach’s birthday on March 21, Shriver Hall Concert Series will screen the film Bach & Friends by Baltimore filmmaker Michael Lawrence at 7:30 p.m. on Wednesday, March 16, in Shriver Hall Auditorium. Following the two-hour feature film, the audience is invited to participate in a question-and-answer session hosted by Lawrence.

Tickets for this event are $15 with all proceeds going to the Jephta Drachman Endowment for Education and Outreach to help the series meet a match challenge by the France-Merrick Foundation.

At 5:30 p.m. on Sunday, March 20, the eve of Bach’s birthday, world-renowned violinist Gil Shaham will perform a recital of unaccompanied Bach partitas and sonatas as part of the SHCS Subscription Series; tickets are $38 for adults and $19 for students.

Bach & Friends, a documentary, is both a tribute to one of music’s most important innovators and a labor of love for filmmaker Lawrence. Centering on the perspectives of contemporary musicians, scientists and writers on the music of Bach, the film contains interviews with and performances by a veritable who’s who of today’s music world, including vocalist/conductor Bobby McFerrin, violinist Joshua Bell, clarinetist Richard Stolzman, the Emerson String Quartet, mandolinist Christopher Thile, banjoist Bela Fleck, composer Philip Glass, bassist Edgar Meyer and violinist Hillary Hahn. Michael Hawley, founder of MIT’s GO Expeditions and an accomplished classical pianist, weaves through the film a narrative about Bach’s life.

Anne Midgette, music critic for The Washington Post, said about the film, “In short, this is a love letter, given an additional glow by loving camerawork and equally loving visual editing. And it does have plenty to offer: some fine performances, some interesting information and what amounts to a cross section of today’s classical music world, in many of its current manifestations, from highbrow to crossover.”