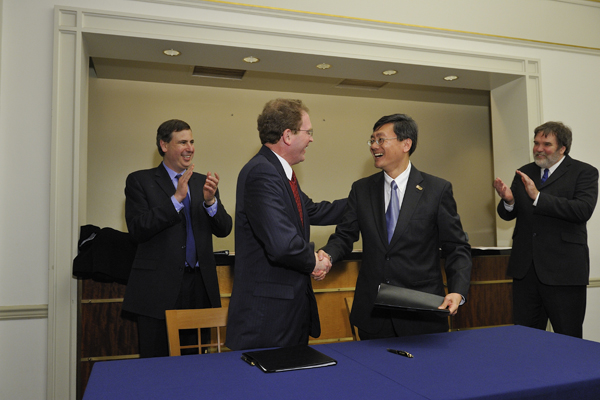 Lloyd Minor of JHU and Tan Eng Chye of NUS shake hands after signing the agreement, while Jeffrey Sharkey of JHU and Bernard Lanskey of NUS applaud. Photo: Will Kirk/Homewoodphoto.jhu.edu

The Johns Hopkins University and the National University of Singapore have signed an agreement to launch a joint bachelor of music degree program starting in the 2011–2012 academic year. Offered jointly by the Peabody Institute at Johns Hopkins and the NUS Yong Siew Toh Conservatory of Music, it will be the first and only international undergraduate conservatory music program of its kind in the world, and will allow students to attend classes in both Baltimore and Singapore.

“To see students from Peabody and Yong Siew Toh united on the stage of this landmark hall in one of the world’s most international cities was glorious,” Daniels said. “What a wonderful expression of the cross-cultural collaboration that is so significant to both our institutions and to the world of music. With our unique joint degree program, we rededicate ourselves to training 21st-century artists whose musical and cultural knowledge transcends boundaries and elevates us all. We are thrilled to build on this great partnership with our close friends in Singapore.”

Students enrolled in the four-year program will spend three out of eight semesters at the sister institution, one in their second year of study and two in the third. It is expected that three to five top students from each institution will be accepted into this program for the inaugural year.