Students take part in a high-tech game of Simon Says 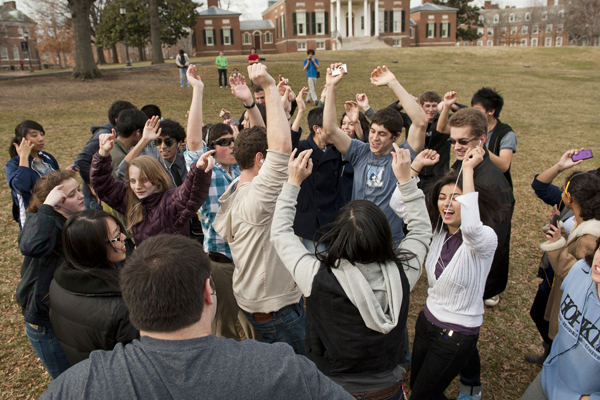 Dozens of Johns Hopkins students took part in a high-tech game of Simon Says last Saturday on the Homewood campus. Dubbed the Mp3 Experience, the game had the participants download to their Mp3 players identical—and purposefully silly—instructions that they had to follow.

At an assigned time, the students walked out of their residence halls and pressed “play” in unison, not knowing what would happen next.

They were instructed, for example, to perform light stretches and then a series of crazy walks across campus as they collectively made their way to The Beach. At one point, the students were told to blend in with a tour group and then freeze in place, much to the surprise of the group and passersby. They also were asked to walk like zombies and dance to Michael Jackson’s Thriller. The event concluded with an epic thumb war and zombie dance party.

The concept was created seven years ago by an improv group from New York called Improv Everywhere, which did its first Mp3 Experiment during one of its shows.

The Johns Hopkins version was created by Damish Shah and Joss Schafer, both freshmen in the Whiting School of Engineering, who said that they plan to host another Mp3 event next spring, if not sooner.