CTY: Math, minds and a milestone

Researchers, former students, top math educators gather for 40th anniversary of the founding of the Study of Mathematically Precocious Youth 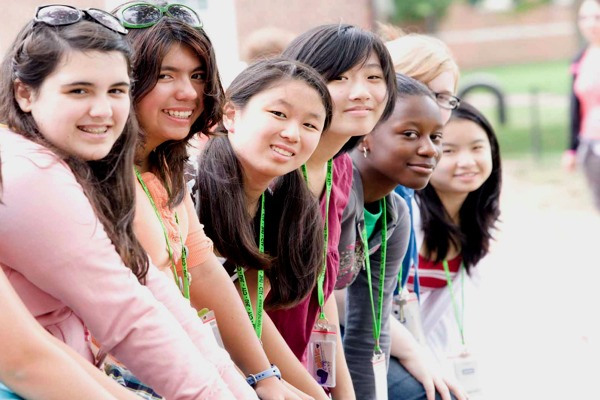 President Barack Obama, in his January State of the Union address, challenged Americans, saying, “We need to teach our kids that it’s not just the winner of the Super Bowl who deserves to be celebrated, but the winner of the science fair.”

Two Johns Hopkins events—a major math education symposium and a ceremony honoring the brightest middle school students in the country—take place this weekend as the Center for Talented Youth keeps front and center the president’s focus on high-achieving young people.

Researchers, former students and top math educators will convene on the Johns Hopkins Mount Washington campus on Friday, March 25, to mark the 40th anniversary of the founding of the Study of Mathematically Precocious Youth, or SMPY.

The study was founded in 1971 by Johns Hopkins psychologist and gifted education pioneer Julian Stanley, who would go on to found CTY in 1979. Stanley died in 2005, and leading the study now, and attending the symposium, will be Camilla Benbow, a former graduate student of his, and David Lubinski, both of whom are now at Vanderbilt University. Benbow and Lubinski plan to complete a 50-year study involving 5,000 people who were first identified as academically talented in their middle school years in five groups identified between 1972 to 1997.

Leaders of the study say they believe that its goals are as vital as ever: to develop a better understanding of the unique needs of high-ability youth, and to determine what major forces influence their lives and their careers.

The data mountain has produced some jewels. Of the SMPY members who scored at 700 or above on the math or verbal side of the SAT, 50 percent eventually received a doctoral degree, compared with 1 percent of the general population. In other words, the above-level test is startlingly effective at predicting academic achievement among high-scoring middle school students.

“This finding is significant to CTY because it validates a key CTY practice—of using above-level tests, such as the SAT with middle school students, to identify academic talent,” said Lea Ybarra, the center’s executive director.

The study also illustrates that students scoring 700 on the SAT math or verbal sections by age 13 show marked differences in income, patents earned and tenure-track academic positions secured at top U.S. universities over a comparison group of students who earned scores of 500 SAT math or verbal at the same age.

As a steadfast proponent of predictive values of above-level standardized testing, the study has held its sail in some buffeting crosswinds over time. A 2006 article in American Psychologist stated that “standardized tests are thus not sufficiently predictive of future performance. Individuals are not necessarily more meritorious if they obtain the highest scores on standardized tests.” The SMPY study directors’ rejoinder, based on their own research: “This is simply not the case.”

Personal stories about individual talent development certainly abound at Johns Hopkins. Jason Eisner, an associate professor of computer science in the Whiting School who was identified by Stanley in 1981, is one. “I liked thinking about numbers and variables from an early age,” Eisner said, referring to his preschool years. Guided by his parents, both supportive math professionals, he devoured as a fourth-grader books by Martin Gardner and Raymond Smullyan, in middle school taught himself to program and attended CTY for three summers, and in high school connected with an older high school mentor who would later win a gold medal in the International Math Olympiad.

The SMPY organizers’ goal for the symposium is to ensure that current and future Jason Eisners get the nurturing they need. Friday’s sessions at the invitation-only event will summarize findings of the 40-year study, and attendees will hear former students’ first-person reports of the factors that contributed to their own high achievement in mathematics. Sessions include topics such as “Interventions and Experiences That Contribute to the Development of High Mathematical Achievement” and “Turning Talented Math Learners Into Creative Producers, Innovators and Entrepreneurs.”

In addition to Benbow and Lubinski, key participants include Linda Brody, director of the Study of Exceptional Talent, or SET, at CTY; Bharath Sriraman, of the University of Montana; and Susan Athey, an eminent Harvard economist and a SET member.

Two days later, as part of CTY’s weekend focusing on top talent, the center hosts its national Grand Ceremony at 1 p.m. on Sunday, March 27, in Shriver Hall on the Homewood campus.

The Grand Ceremony is the culmination of 84 regional awards events that CTY holds across the country to recognize top academic talent, and will honor the students who were the top scorers in the nation and world on the SAT or ACT that they tackled as part of CTY’s 2010 Talent Search.

“When President Obama asked us as a nation to celebrate academic talent, we felt true satisfaction that CTY and Johns Hopkins carry a long tradition of doing just that through our annual awards ceremonies,” Ybarra said.

Keynoting the celebration of top talent will be Adam Riess, a professor of physics and astronomy in the Krieger School of Arts and Sciences and co-recipient of the 2011 Einstein Medal, who led a team that discovered dark energy, which is theorized to be causing continued expansion of the universe.

Top-scoring students this year, some of whom will grace the Shriver stage and receive an academic medal from CTY, hail from as near as Timonium, Md., and as far as South Korea, Hong Kong and Bangladesh.

The question begs to be asked of some of the young awardees: What makes you smart?

Ask Jonathan Sington, a ninth-grader from Santa Monica, Calif. “Ever since my mother taught me to read when I was 2, I have been a voracious reader.”

For Ybarra, the annual Grand Ceremony is a highlight of the year.  “Clearly, these are the young people who are setting the pace. It’s been such an honor to lead an organization like CTY and see remarkable young people like these, and to know that CTY and Johns Hopkins do so much to encourage new generations of students to think big and to pursue their limitless potentials.”

Bridging the two events is a CTY Family Academic Program on Saturday, March 26, in which CTY students and their families will spend the day immersed in the world of applied and theoretical mathematics.