After six-year journey, APL-managed spacecraft arrives at its destination 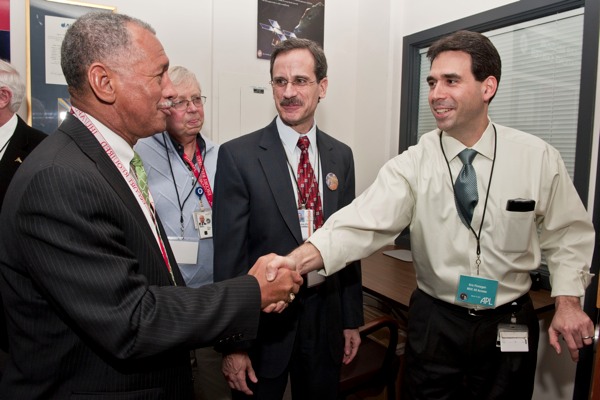 At 9:10 p.m. on Thursday, March 17, engineers in the Messenger Mission Operations Center at the Johns Hopkins University Applied Physics Laboratory received the anticipated radiometric signals confirming nominal burn shutdown and successful insertion of the Messenger probe into orbit around the planet Mercury.

The spacecraft rotated back to Earth by 9:45 p.m. and started transmitting data. Upon review of these data, the engineering and operations teams confirmed that the burn executed nominally with all subsystems reporting a clean burn and no logged errors.

Messenger’s main thruster fired for approximately 15 minutes at 8:45 p.m., slowing the spacecraft by 1,929 miles per hour and easing it into the planned eccentric orbit about Mercury. The rendezvous took place about 96 million miles from Earth.

“Achieving Mercury orbit was by far the biggest milestone since Messenger was launched more than six and a half years ago,” said Messenger project manager Peter Bedini, of APL. “This accomplishment is the fruit of a tremendous amount of labor on the part of the navigation, guidance-and-control and mission operations teams, who shepherded the spacecraft through its 4.9-billion-mile journey.”

For the next several weeks, APL engineers will be focused on ensuring that Messenger’s systems are all working well in Mercury’s harsh thermal environment. Starting on March 23, the instruments will be turned on and checked out, and on April 4 the primary science phase of the mission will begin.

“Despite its proximity to Earth, the planet Mercury has for decades been comparatively unexplored,” said Messenger principal investigator Sean Solomon, of the Carnegie Institution of Washington. “For the first time in history, a scientific observatory is in orbit about our solar system’s innermost planet. Mercury’s secrets, and the implications they hold for the formation and evolution of Earth-like planets, are about to be revealed.”

Messenger is carrying seven science instruments and is fortified against the blistering environs near the sun, which is 28.67 million miles away. The insertion placed the spacecraft into a 12-hour orbit about Mercury, with a 124-mile minimum altitude.

APL designed and built the spacecraft. The lab manages and operates the mission for NASA’s Science Mission Directorate in Washington.