Residencies at the end of the rainbow 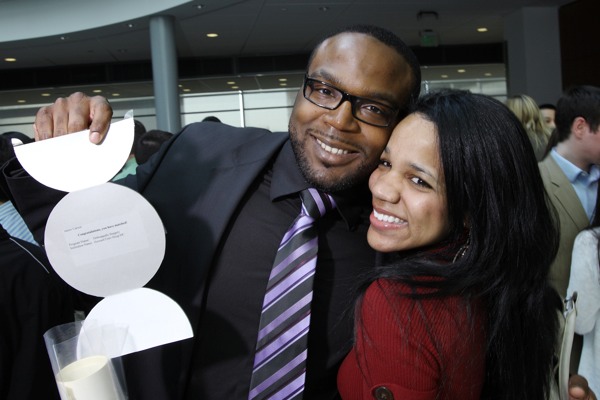 James Carson, with his girlfriend Taylor Regis, share their news. Photo: Will Kirk

The fourth-year medical students may not have needed the luck of the Irish on March 17, but many wore green and crossed their fingers as they opened envelopes that contained the answer to where they will begin their careers as doctors.

From the many smiles, shrieks and tears of joy that followed, the majority got their wish.

The event is called Match Day, an emotionally charged gathering where all the students simultaneously open letters—precisely at the strike of noon—to find out the hospital where they have been accepted for residency.

Since this year’s Match Day fell on St. Patrick’s Day, the color green was ubiquitous, from the balloons and shamrock decorations to the cookies and cupcakes. The envelopes came in the shape of gold coins that students pulled from a pot at the end of a balloon rainbow. The school’s Alumni Office also sold green T-shirts.

The event took place on the second floor of the Armstrong Medical Education Building, a space filled with family members, classmates and professors who came to show support.

The 2011 graduating class contains 44 women and 55 men, and all but two have chosen to enter a residency program next year. The most popular specialties are internal medicine, pediatrics, anesthesiology, orthopedic surgery, radiology and general surgery. Internal medicine and pediatrics have traditionally been the most sought-after specialties for Johns Hopkins graduates over the past two decades.

Match Day takes place every year on the same day—the third Thursday in March—at medical schools around the country. The National Resident Matching Program, designed to keep the matches fair and objective, pairs the wishes of the students with the needs of hospitals’ residency programs. Prior to Match Day, students complete lengthy paperwork, interview on site with hospitals and then provide a ranked list of top choices. Hospitals submit a similar list indicating openings, preferred students and specialty or generalist preferences. Each applicant is matched via computer algorithm to the hospital residency program that is highest on the applicant’s list and has offered the applicant a position. Johns Hopkins students often match to their first- or second-choice sites.

The students secured placement in some of the country’s most prestigious hospitals, including Johns Hopkins (34 of the 97), Massachusetts General, UCLA Medical Center and Mayo Clinic.