‘Baltimore, Film and the Arts’ panel kicks off film festival 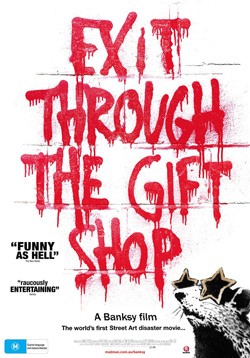 The Academy Award–nominated ‘Exit Through the Gift Shop’ is one of five feature films that will be screened during a film-filled week on the Homewood campus.

The festival, hosted by the Johns Hopkins Film Society, continues through Sunday, April 3, with a showcase of student films, five 35 mm feature film screenings and two programs of short films from across the country and around the world, all in Shriver Hall Auditorium.

This year’s festival theme is Intersecting Arts, a concept allowing audiences to explore what it means for film, paint, sculpture, sound, creative writing, graffiti, fashion and all genres in between to coexist. The student organizers say that the theme reflects Baltimore’s arts scene and recognizes the importance of artists of various media uniting to form one true community.

On Friday, April 1, the festival features the young filmmakers’ showcase of student films at 6 p.m., followed by Beautiful Losers (2008) at 8 p.m. and the Academy Award–nominated Exit Through the Gift Shop (2010) at 10 p.m.

The events on Saturday, April 2, begin at 1 p.m. with a screening of the film Turkey Bowl (2011), followed by shorts programs at 3 and 5 p.m. The 3 p.m. program will feature the work of nationally known filmmakers Vin Grabill, Cathy Cook, Fred Worden and Eric Dyer, all media art faculty members at the UMBC Department of Visual Arts. The evening ends with the Jean-Luc Godard film Pierrot Le Fou (1965) at 7:30 p.m.

Admission is free for JHU students and affiliates with proper ID. For the public, screening passes are $5, day passes $10 and festival passes $20. All tickets can be bought at any show.

For more information and a complete schedule of films, go to the group’s Facebook page at www.facebook.com/event
.php?eid=192635210776779.