Yearlong observation campaign of planet will begin on April 4. 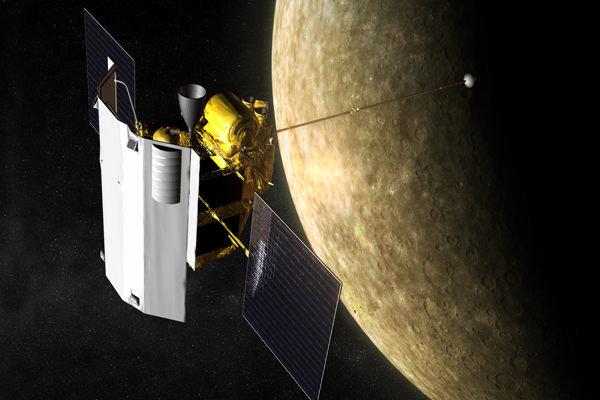 Data from its first three days in orbit about Mercury confirmed the initial assessment of the spacecraft team that Messenger is in its intended orbit and operating nominally.

“The team is relieved that things have gone so well, but they remain busy as they continue to configure the spacecraft for orbital operations and monitor its health and safety in the new environment,” said Messenger project manager Peter Bedini, of the Johns Hopkins University Applied Physics Laboratory.

On March 21, the navigation team delivered an orbit determination that will span Messenger’s first four weeks in orbit. Starting on March 23, the team began commissioning the science instruments. That day the Energetic Particle and Plasma Spectrometer, Magnetometer, Mercury Atmospheric and Surface Composition Spectrometer, Mercury Laser Altimeter, Neutron Spectrometer and X-Ray Spectrometer were turned on. On March 29, the Mercury Dual Imaging System will be powered on and will take its first images.

The yearlong science observation campaign will begin on April 4.

“We are about to embark on the first essentially continuous observations of Mercury by an orbiting spacecraft,” said Messenger principal investigator Sean Solomon, of the Carnegie Institution of Washington. “It will be a shared adventure long anticipated and much to be relished.”

Those interested in following Messenger’s journey in its orbit about Mercury can visit the newly revised Where is Messenger? website feature, which offers simulated views of the spacecraft’s current orbit and what the planet looks like from its current perspective. The Solar System Simulator offers another option for portraying Mercury from the perspective of the Messenger spacecraft at any time during the remainder of the mission. Simulated views of nearby Mercury or distant Earth from Messenger may be created for a variety of fields of view.

Messenger (MErcury Surface, Space ENvironment, GEochemistry and Ranging) is the first space mission designed to orbit the planet closest to the sun. APL built and operates the spacecraft and manages the mission for NASA.

For complete information on the spacecraft’s orbital operations, go to messenger.jhuapl.edu/mer_orbit.html.