Celebration of the arts to begin on three campuses 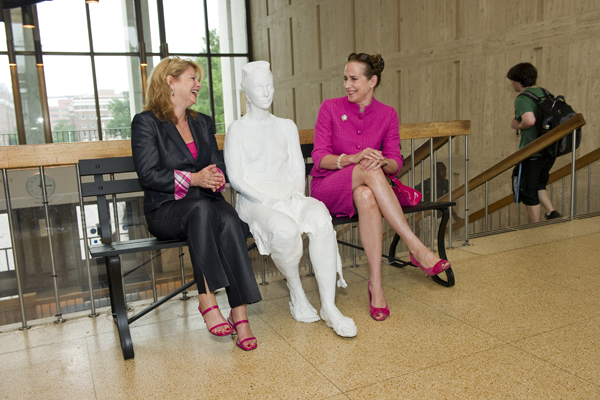 The Homewood sculpture tour includes the George Segal piece in the MSEL, visited here by Lisa Manfuso and Linda McGill, of Development and Alumni Relations. Photo: Will Kirk/Homewoodphoto.jhu.edu

Viewers of Hopkins, the seven-part ABC network news documentary that aired in the summer of 2008, know the special blend of tension, elation and heartache that embodies life at The Johns Hopkins Hospital. The Peabody Award–winning series portrayed doctors, nurses and many patients who agreed to share remarkably private moments.

This week, seven faculty and staff members will share their own personal tales of triumph, defeat and humanity at the Stoop Storytelling Series’ “Hopkins Medicine: A World Inside a City.”

The event is part of the inaugural universitywide JHU Arts Festival. Students, faculty, staff and alumni will share their talents for everything from dance to digital media during the event, which runs from Wednesday to Sunday.

In total, more than 35 performances, workshops and talks are open to the public and will take place at various locations on the university’s Homewood, Peabody and East Baltimore campuses. The events, most of which are free, include film screenings, musical and theatrical performances, dance, visual arts displays and readings.

The five-day event was organized by Eric Beatty, director of Homewood Arts Programs, and Joan Freedman, director of the Digital Media Center. The pair received support from Winston Tabb, Sheridan Dean of University Libraries and Museums and chair of the Homewood Arts Task Force.

Beatty said that the organizers wanted to celebrate the artistic endeavors of the Johns Hopkins community and remind people that the university bristles with a wide breadth of creativity of a nonscientific nature.

“We want to lift up the arts at Johns Hopkins and celebrate that they are part of our fabric here, on every campus,” Beatty said. “When we began planning the festival, it was important to include participants from throughout Johns Hopkins—students, faculty, staff and alumni—and also to include all of the art forms on all three of our Baltimore campuses.”

Tabb agreed that the arts deserve their due.

“I am very excited that so many individuals and groups at Johns Hopkins have volunteered to participate in this first annual festival,” Tabb said. “It’s a great way to showcase the astounding variety and extent of artistic activity on our campuses. I really appreciate the support of the Provost’s Office and many others in making this debut event possible.”

The festival kicks off at 6 p.m. on Wednesday in Homewood’s Arellano Theater with a lecture and performance from Matmos, an internationally renowned experimental electronic music duo that includes Drew Daniel, an assistant professor of English in the Krieger School. Daniel and Martin Schmidt will present examples of their work and talk about their artistic process, collaborations, inspirations, tools and aesthetics. The duo creates whimsical and peculiar electronic sound assemblages that often feel like musical versions of Alexander Calder sculptures.

The one-night-only Stoop show, to be held at 7 p.m. on Friday in the School of Medicine’s Turner Auditorium, will feature live music from 2econd N8ture and stories from a documentary filmmaker, patient re-enactor, pediatrician, anesthesiologist and gynecology-oncology nurse at the hospital and School of Medicine, and also Courtland Robinson, deputy director of the Center for Refugee and Disaster Response at the Bloomberg School of Public Health. It will be presented in partnership with the JHMI Office of Cultural Affairs.

Matthew Porterfield, a lecturer in the Film and Media Studies Program in the Krieger School of Arts and Sciences, will present screenings of his two Baltimore-inspired films, Putty Hill and Hamilton, at 7 p.m. on Wednesday in Homewood’s Hodson Hall Auditorium, Room 110. Porterfield will host a Q&A before the Hamilton screening.

On Thursday, Writing Seminars faculty members Tristan Davies, Matthew Klam, Jean McGarry and Mary Jo Salter will lead a panel discussion at noon in Room 101 of the Mattin Center’s F. Ross Jones Building. The faculty will talk about the writing process and field questions from the audience.

The Mattin Center will also host hands-on crafts activities such as bookbinding, cake decorating and soft-circuit sculpture, from 3 to 5 p.m. on Saturday, and a performance of the Andrew Lloyd Webber musical Evita by the Barnstormers, a student theater group, at 3 p.m. on Sunday.

Other events include a performance of Gustav Mahler’s Das Lied von der Erde by Peabody students at 3 p.m. on Sunday in the school’s Leith Symington Griswold Hall.

In conjunction with the festival, ongoing arts-related exhibits will be on display in the Johns Hopkins Archaeological Museum, Homewood Museum, Mattin Center, Digital Media Center and Smokler Center for Jewish Life, all on the Homewood campus; and at Evergreen Museum & Library, 4545 N. Charles St.

A full list of the events and ticket prices, where applicable, can be found at artsfestival.jhu.edu. For more information, call 410-516-8208 or email ebeatty@jhu.edu.