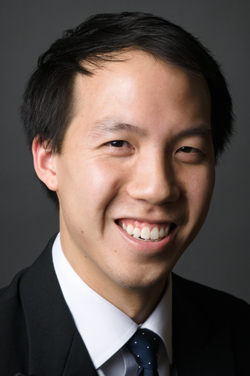 Brian Goh, a second-year student in the MD/PhD program at the Johns Hopkins School of Medicine, has been named a recipient of a prestigious Paul & Daisy Soros Fellowship for New Americans.

In announcing the 2011 recipients last week, the foundation’s board said that the awards “highlight the extraordinary promise, diversity, drive and determination of recent immigrants—and children of immigrants—to this country.” The Soroses, both immigrants who struggled to support their graduate studies, chose to honor the continuing promise of immigrants by funding these awards.

The fellowships may be used at any degree-granting graduate program in any field in the United States. Each two-year award provides cash grants of up to
$50,000 and tuition support of up to $40,000.

This year’s 30 Soros Fellows were chosen from 1,009 applicants.

Now 24, Brian Goh was born in Baton Rouge, La., to parents of Chinese extraction who had immigrated to this country from Malaysia. His father, one of 16 children, had been a manual laborer on a rubber plantation but managed to gain admission to— and eventually a doctorate from—Louisiana State University. His family members, all naturalized U.S. citizens, reside in Denham Springs, La.

Goh graduated in 2009 from Louisiana State University as a biochemistry major, earning a perfect 4.0 GPA and election to Phi Beta Kappa. While there, he received a Goldwater scholarship and a Howard Hughes Institute summer research award, and was named by USA Today to the 2009 All-USA College Academic First Team.

Goh began his biomedical research at LSU during the year he took off between high school and college. His work focused on two areas: the evaluation of genes encoding common circadian regulatory proteins, and the use of adipose stem cells for tissue engineering applications. During his time at LSU, he was co-author of 11 publications in important journals. His research will continue to focus on manipulating adult stem cells for cardiac and bone tissue regeneration. He is especially interested in the possibility of engineering solutions to tissue deficits caused by congenital defects or following injury.

Committed to the notion of translational medicine—applying the synergy of research and clinical endeavors—Goh was a founding member of, and is the director of health screenings for, Charm City Clinic, a health-access partnership started by Johns Hopkins medical students.

Goh combined his biomedical interests with his avid commitment to cycling by founding Team Detour, which raised more than $30,000 for a Louisiana cancer center. He led the team by lobbying the Louisiana congressional delegation in Washington, D.C., and then spearheading a 2,000-mile Capitol to Capitol ride from Washington to Baton Rouge.

The Soros Fellowship Program is funded by income from a charitable trust of $75 million created by philanthropists Paul and Daisy Soros, of New York City and New Canaan, Conn. Since its inception in 1998, more than $35 million has been spent in support of graduate education of new Americans.

“Our selection criteria,” Paul Soros says, “are designed to identify people who will make a success of their lives and who will contribute something to this country, in whatever area of endeavor they choose.”