Messenger sends back first image of Mercury from orbit 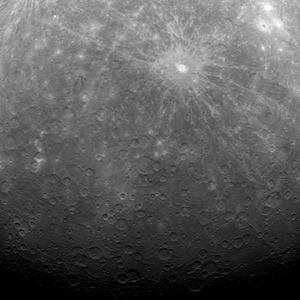 This photograph taken from high above Mercury’s south pole shows portions of the planet’s surface that have never been seen before. Photo: NASA

At 3:40 a.m. on March 28, Messenger delivered its first image since entering orbit about Mercury on March 17. The image was taken by the Mercury Dual Imaging System as the spacecraft sailed high above Mercury’s south pole. It provides a glimpse of portions of Mercury’s surface not previously seen by spacecraft.

The image was acquired as part of the orbital commissioning phase of the Messenger mission. Continuous global mapping of Mercury will begin today, April 4.

“The entire Messenger team is thrilled that spacecraft and instrument checkout has been proceeding according to plan,” said Messenger principal investigator Sean Solomon of the Carnegie Institution of Washington. “The first images from orbit and the first measurements from Messenger’s other payload instruments are only the opening trickle of the flood of new information that we can expect over the coming year. The orbital exploration of the solar system’s innermost planet has begun.”

The Johns Hopkins University Applied Physics Laboratory built and operates the Messenger spacecraft and manages the Discovery-class mission for NASA.