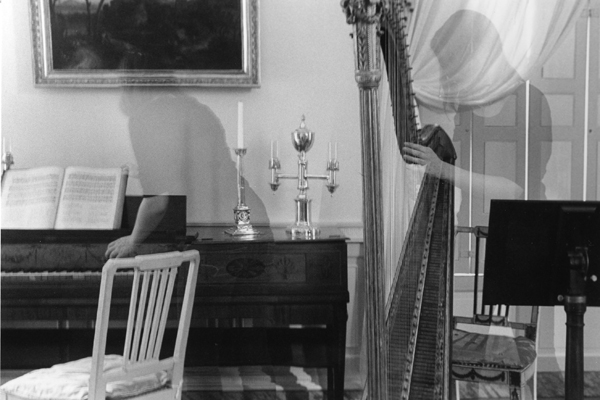 ‘Drawing Room’ is one of 10 photographs in a new exhibit by Lydia Alcock, a junior in the Krieger School of Arts and Sciences.

Opening this week: An intimate exhibition of 10 photographs by Johns Hopkins junior Lydia Alcock that is inspired by the human history of Homewood Museum, built in 1801 as the country home of Charles and Harriet Carroll. By connecting her ghostly images to excerpts from Harriet’s poetry, Alcock invites visitors to see themselves as a continuum of individuals who have walked Homewood’s halls.

A psychology major with a minor in the Program in Museums and Society in the Krieger School of Arts and Sciences, Alcock has worked at Homewood Museum since 2009 and in 2010 held the museum’s Pinkard-Bolton curatorial internship.

The opening reception for Phantom Callers: Photographs by Lydia Alcock, offered as part of the inaugural JHU Arts Festival, will be held in the museum from 4:30 to 6:30 p.m. on Thursday, April 7, with an artist’s talk scheduled for 5:30 p.m. Reservations are requested by calling 410-516-5589 or emailing homewoodmuseum@jhu.edu.