With the arrival of spring comes the Johns Hopkins University School of Medicine’s 34th annual Young Investigators’ Day celebration honoring junior researchers’ scientific accomplishments. This year’s event recognizes 13 graduate students and six postdoctoral fellows with awards. The program will be held at 4 p.m. on Thursday, April 14, in the Mountcastle Auditorium on the East Baltimore campus, followed by a poster session and a reception. The program will honor the award recipients, and highlighted awardees will have the opportunity to present their research findings.

The awards come with a cash prize funded by friends of the school and the Johns Hopkins Medical and Surgical Society. Each award is named for a former graduate student or faculty member researcher.

Early in their careers, many of this year’s awardees watched their more-advanced lab mates honored over the years, and they dreamed that they, too, would one day receive an award.

“I aspired for this award since I was a first-year PhD student,” said Ryota Matsuoka of Alex Kolodkin’s lab in Neuroscience. “Attending the Young Investigators’ Day ceremony and seeing successful Hopkins students and fellows has kept me motivated to make a great discovery.” Matsuoka won one of the four Paul Ehrlich Awards, for research on vertebrate retinal development. His project explores how electrical circuits form between nerve cells in the eye. He is graduating in May and will begin a postdoctoral fellowship this summer at the University of California, San Francisco.

“I have always enjoyed watching previous awardees present their work and have been in awe of their accomplishments,” said Rebecca Lamason, this year’s Hans J. Prochaska Award recipient. “I am honored to be considered part of that group now.” Lamason, a PhD candidate in Joel Pomerantz’s lab in Biological Chemistry, studies how T cells in the immune system become activated to mount an immune response. She identified a new protein regulator that finely tunes how T cells respond when they come in contact with an antigen. 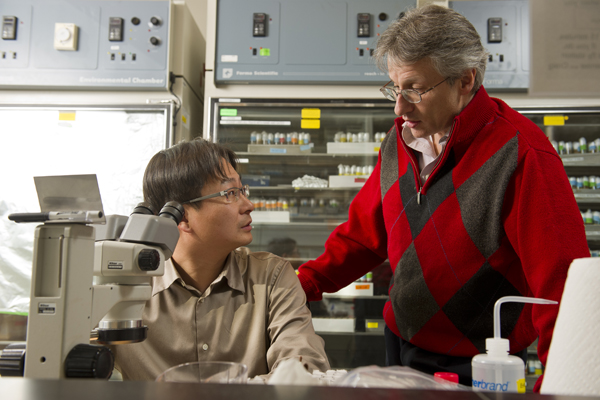 Youngseok Lee, winner of the A. McGehee Harvey Award for his work on insect taste receptors, with his adviser, Craig Montell. Photo: Will Kirk/Homewoodphoto.jhu.edu

Youngseok Lee of Biological Chemistry says that a Young Investigators’ Award is a good motivator for him to pursue future studies on his project. “Climbing the mountain is hard, but I am thrilled now that I have reached the top, and I am really enthusiastic to keep going,” he said. Lee, winner of the A. McGehee Harvey Award and a postdoctoral fellow in Craig Montell’s lab, wants to start his own lab expanding on his ideas and the research that he has accomplished while at Johns Hopkins. He studies insect taste receptors and showed that the insect repellent DEET works by suppressing the appetite in fruit flies.

For some recipients, their awards have special meaning on a personal level.

“I have always felt hugely indebted to the Cell and Molecular Medicine graduate program for accepting me when I did not have any funding or a day of laboratory research experience,” said Jefferson Doyle, an international PhD candidate who received his medical degree before coming to Johns Hopkins. “I hope this award shows in some way that I have lived up to the program’s expectations.” Doyle won a Michael A. Shanoff Award for his work, in Hal Dietz’s lab in the Institute for Genetic Medicine, showing that calcium channel blockers, a class of drugs used to lower blood pressure and to treat patients with the connective tissue disorder Marfan syndrome, may actually cause more harm than good. His work has also identified a new type of therapeutic agent, ERK inhibitors, that may be used to treat patients with Marfan syndrome. Doyle plans to apply for residency programs in ophthalmology and develop a career as a clinician scientist to study genetically inherited eye diseases. 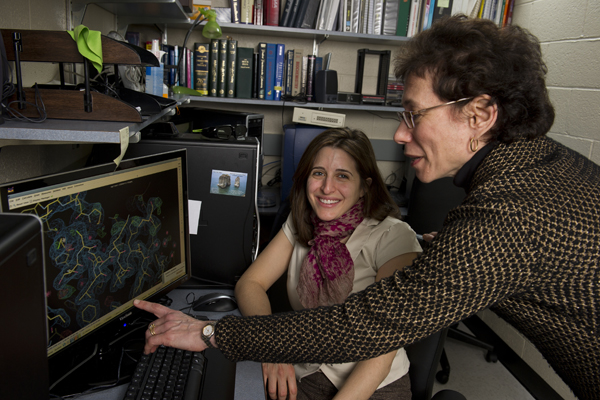 Nadine Samara, winner of the Alice Showalter Reynolds Award for her work in structural biology, with her adviser, Cynthia Wolberger. Photo: Will Kirk/Homewoodphoto.jhu.edu

Nadine Samara, of Cynthia Wolberger’s laboratory in Biophysics and Biophysical Chemistry, won the Alice Showalter Reynolds Award. “Getting this particular award and getting recognized as a female in my field is exciting, especially because structural biology is an area that is still dominated by men,” Samara said. “I hope this recognition inspires other young scientists to do research in any field that excites them, independent of their background or gender,” she added. Samara has solved the 3-D structure of four interacting proteins that together help turn on genes in yeast. She expects to receive her PhD in May and has a fall postdoc position lined up at the National Institutes of Health.

PhD candidate Ting Guo, of David Ginty’s lab, won the David Macht Award. Macht was a pioneer in the brain science field who used medications to treat mental disease. “Macht symbolizes our very long tradition and glorious history of excellence in neuroscience,” Guo said. “As a student within the Hopkins Neuroscience family, I greatly admire Dr. Macht, and therefore it is an incredible honor with special meaning for me to receive this award.” Guo showed that sensory neurons that detect extreme cold form connections with other neurons differently in mice than they do in chicks and lizards. Guo identified and characterized the specific gene that contributes to this unique development of mammalian sensory neurons.

Junbiao Dai sees his Albert Lehninger Award as a testament to his hard work and ability to overcome hurdles. “I still remember the day when my supervisor, Jef Boeke, approached me to tell me that our collaborator had turned into our competitor,” Dai said. “We spent four months working around the clock to finish the experiments and write the paper. The good news is that we made it and beat out our competition, which gave me a true sense of accomplishment,” he said. Dai finished his postdoctoral fellowship here in Molecular Biology and Genetics and has moved back to China to accept a tenure-track associate professorship at Tsinghua University.

Several awardees attribute their project’s success and their award to excellent mentorship.

“Dr. Robert Siliciano taught me to focus on the big picture and ask important questions,” said Lin Shen, winner of a Michael A. Shanoff Award. “He opened the door and showed me the beauty of science. Not only did I learn how to do great science and think independently, but I learned how to be a great mentor and collaborator, too.” Shen discovered a more-effective way of measuring antiviral activity of different combinations of HIV drugs using a new mathematical calculation. Her method also may be used to analyze the effectiveness of drugs that combat other infections, such as hepatitis C and influenza virus. She completed her PhD studies last fall and will start a medical residency this summer at the University of Pittsburgh Medical Center.

“My thesis adviser, Dr. Martin Pomper, always showed me enormous trust and patience,” said Hyo-eun “Carrie” Bhang. “He let me take as much time as I needed to look at my data from multiple angles and to develop my own interpretations and directions. My achievement was only possible thanks to his endless support.” Bhang won a Paul Ehrlich Award for her work developing a new imaging system to detect the spread of cancer throughout the body. She completed her PhD studies in the fall and continues to make improvements to her cancer imaging system as a postdoctoral fellow in the Pomper lab.

Michael Kornberg, an MD/PhD candidate in Neuroscience, says that the most important factor contributing to his Nupur Dinesh Thekdi Award was the guidance he received from his mentor. “The environment that Sol Snyder has created in his lab specifically fosters creativity and independence,” Kornberg said, “and he has a great deal of confidence even in junior graduate students.” Kornberg studies the mechanism for how nitric oxide is transferred onto proteins to change their activity. He graduates this spring, and next year he will begin a residency in neurology here at Johns Hopkins.

Other trainees said they felt that teamwork was key to their success. 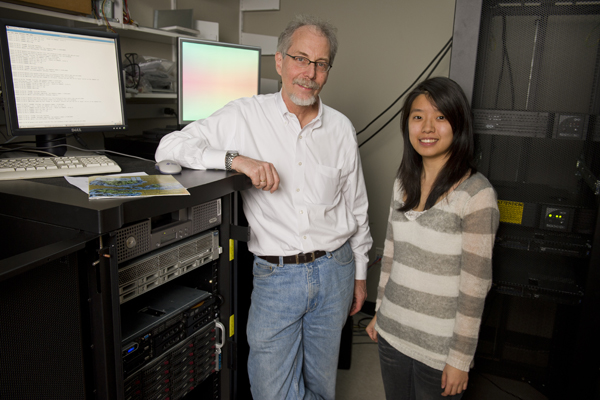 Cheng Ran “Lisa” Huang, seen her with her adviser, Jef Boeke, will receive a Paul Ehrlich Award for her research suggesting that the high prevalence of ‘jumping genes’ may be an unrecognized source of human diversity. Photo: Will Kirk/Homewoodphoto.jhu.edu

“One of the main reasons that brought me to Hopkins in the first place was the collaborative environment here that allows interdisciplinary research to be possible,” said Cheng Ran “Lisa” Huang, of Jef Boeke’s lab in Molecular Biology and Genetics. Huang, a PhD candidate who studies actively moving pieces of DNA in our genomes, won a Paul Ehrlich Award. Her research suggests that the high prevalence of these DNA pieces—sometimes referred to as jumping genes—may be an unrecognized source of human diversity.

“My project was a group effort,” said Michael Haffner, “and it was certainly the collaborative atmosphere of Hopkins that allowed us to work together with different individuals, share expertise and as a group explore new and exciting aspects of cancer biology.” Haffner works as a postdoc in Vasan Yegnasubramanian’s lab at the Sidney Kimmel Comprehensive Cancer Center. His research demonstrated how testosterone can damage the DNA in prostate cancer cells and led to his W. Barry Woods Jr. Award.

Although only a small portion of early-career scientists receive awards, the purpose of Young Investigators’ Day is to encourage and celebrate the research from all trainees at the School of Medicine. 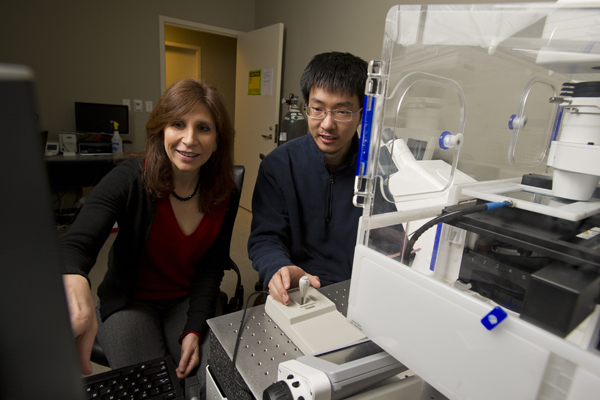 Denise Montell and Li He

“Besides a celebration, Young Investigators’ Day is a good opportunity for Hopkins students and fellows with diverse backgrounds to get together, communicate, make friends and learn from each other’s experiences,” said PhD candidate Li He, of Denise Montell’s lab in Biological Chemistry and the Institute for Basic Biomedical Sciences’ Center for Cell Dynamics. He won the Mette Strand Award for his work in fruit flies. Specifically, he discovered how tissues elongate during development to sculpt organ shape.

Mingye Feng, winner of the Martin and Carol Macht Award, said, “Young Investigators’ Day is a great opportunity to see what kinds of projects our colleagues work on. I really enjoy being there, and I always learn a lot,” he said. Feng, who will receive his degree in May, completed his dissertation in Rajini Rao’s lab in the Department of Physiology. He discovered that a protein pump that brings calcium into cells, normally only in lactating breast cells, is abnormally turned on in breast cancer cells. For his postdoctoral fellowship, Feng is moving to a lab at Stanford, where he will study cancer stem cells.

Other winners are Eric Momin, with a Paul Ehrlich Award; Joo-Ho Shin, with the Alfred Blalock Award; Roger Clem, with the Daniel Nathans Award; Qin Liu, with the Helen B. Taussig Award; and Emerson Stewart, with the Bae Gyo Jung Award.

Momin is a medical student in Alfredo Quinones-Hinojosa’s lab who studies how health insurance status affects mortality and complication rates in people who have undergone surgery for brain cancer. Shin works as a postdoc in Ted Dawson’s lab at the Institute for Cell Engineering studying a protein that provides a mechanism for neurodegeneration in Parkinson’s disease patients. Both Clem and Liu are postdocs in the Department of Neuroscience; Clem works in Richard Huganir’s lab, and Liu in Zinzhong Dong’s. Stewart is a graduate student in Peter Espenshade’s lab in Cell Biology.