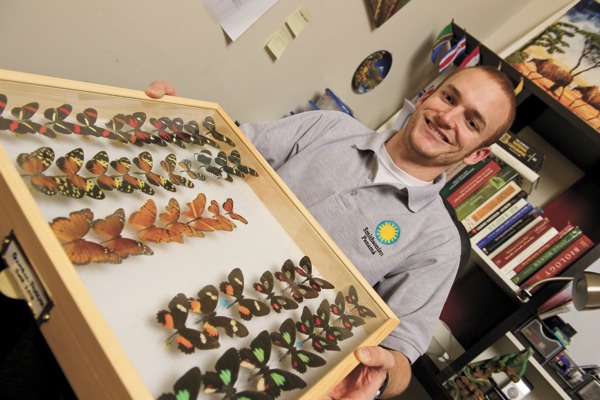 Peter Houlihan has been collecting insects since he was 11 and earned his first Boy Scout merit badge for insect study. Last summer, he camped on an island in the Pacific Ocean to study butterfly populations for his PURA project. Photo: Will Kirk/Homewoodphoto.jhu.edu

It’s a safe bet that most undergraduates enrolling at Johns Hopkins don’t imagine themselves spending two months in the hot, humid rain forests of Panama, trapping lizards and rats and roasting them over an open fire for protein. But that’s exactly what 20-year-old junior Peter Houlihan (photo on front page) did in the course of his PURA project. His research involved comparing two populations of butterflies—one on an island in the Gulf of Panama and one on Panama’s mainland—and determining whether the geographic separation of the island population has caused any phenotypic or genetic variation.

How did you decide to study butterflies? Did you have a butterfly collection as a little boy?  I developed an interest in everything outdoors as a child. I would bring home any animal I could catch, which ended up being quite a few. I certainly had a great interest in insects at the time, but I didn’t start an active insect collection until I was about 11 years old and working on my very first merit badge for Boy Scouts, Insect Study. I was required to collect 50 individuals from 50 different species. I found taxonomy fascinating, and I discovered that not only could running around in the forest all day be fun, but I could also find scientific meaning in what I loved doing. Ever since then, I have added to my insect collection through various research projects. It is a great way to enrich my understanding of tropical ecology and evolution, and to educate others in the field.

You earned your Eagle Scout status in high school. Did that help you in your rain forest adventures?  Definitely! The tropical rain forest is a very intense and demanding place. From high humidity, hot temperatures and intense storms to encounters with venomous snakes, biting and stinging insects, and the rarely seen big cats, a tropical rain forest does not come off as the most welcoming environment in which to live. It is incredibly helpful to have wilderness survival knowledge and first aid training, since safety is always most important.

How do you take DNA samples from butterflies? Did you have to run after them and capture them in a net?  No, I didn’t have to run through the rain forest with a net. I set up traps made of fruit, which attracted the butterflies. The insects were then analyzed through DNA extraction, PCR and gene sequencing at the Canadian Center for DNA Barcoding at the University of Guelph in Canada. I sampled about 180 individual butterflies from approximately 60 different species.

What did you find out?  Evolution describes life on Earth as we know it. It explains why new species form, and why others become extinct. Islands are a perfect setting for studying evolution because they are isolated from other populations. My study is along the same concepts from which Charles Darwin and Alfred Russel Wallace came up with evolution through their research in the Galapagos Islands and the Malay Archipelago.

Through my study, I found out that the butterfly communities on the island have very different composition from the areas that I sampled on the mainland, as well as noticeable differences in phenotypes. Due to the presence of different forest types, host plants and habitat modification, island populations tended to occupy niches that were dissimilar to those of the populations on the mainland. Through my work, butterfly species on the island are being documented by science for the very first time. The samples are currently being compared genetically in order to evaluate the significance of the phenotypic variation between populations.

Tell us about living conditions in the rain forest.  I rented a house on the Panama Canal from the Smithsonian Tropical Research Institute, and the rain forest that I was working in was literally in my backyard. In July, I flew out on a really small plane—sitting next to the pilot—to an airstrip on an island in the Pacific Ocean. I camped on the island for the month of July, living in a tent and hunting my own food. The best way to keep cool there is to wear light clothing and keep your skin out of the sun. It’s also important to keep socks dry. However, much of my traveling involved wading through rivers, since it was easier than walking through the dense forest, full of spiny palm trees and razor-sharp plants, and that meant a lot of wet socks. I also occasionally went swimming in rivers to cool off, although I tended to go swimming more in the ocean when I reached my coastal campsite because that was infested with crocodiles.

Butterflies weren’t the only things you hunted while there, right? Right.
I brought 15 pounds of rice and 10 pounds of pasta to the island, but everything else that I ate came from the forest, rivers or ocean. I ate coconuts, fish, crayfish, lobsters, crabs, birds, insects, lizards and even a rat.

This is an outstanding project on a classic question first articulated by Charles Darwin: How do new species arise? Peter Houlihan is a bright, hardworking young man who is personally driven and has shown an extraordinary degree of initiative in order to implement this project. Sending an undergraduate to a tropical environment to measure phenotypic variation and try to correlate this variation with variation in DNA at first blush sounds like an unrealistic project that would be destined to end in failure. However, the Smithsonian Tropical Research Institute in Panama is one of the premier scientific institutions operating in the tropics, and they provided Peter with local support. Peter then worked very hard and showed a tremendous degree of creativity and diligence in carrying out the work. This is a most impressive achievement.