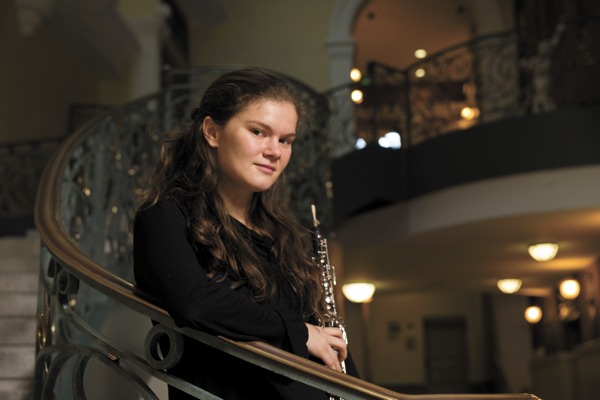 Lindsay Scattergood’s PURA paired her interests in music and anthropology. Photo: Will Kirk/Homewoodphoto.jhu.edu

The two sides of her undergraduate studies, oboe performance and anthropology, eventually led double-degree student Lindsay Scattergood to the School of Medicine’s Sound and Music Perception Laboratory, run by Charles Limb. She began her research into music perception by deaf children in summer 2009. A year later, with the help of a PURA grant, she used a computer-based test battery to collect data from 20 subjects, 10 with cochlear implants and 10 with normal hearing. Sometimes called a “bionic ear,” a cochlear implant is a prosthetic device surgically implanted in the cochlea—the auditory part of the inner ear—to provide a deaf person with an electronic sense of hearing.

Your intellectual path through Johns Hopkins made stops at medical anthropology, cognitive science and music education on the way to carrying out this study. Who were some of your guides? I have been very lucky to have had many passionate, intelligent and influential professors during my tenure. Clara Han, my anthropology thesis adviser, stimulated my interest in medical anthropology. The Theory and Musicology faculty at Peabody taught me about how music “works.” The professionalism, efficiency and depth of musical understanding of Harlan and Laura Parker in Music Education made for an ideal collaborative situation, and she and Eric Rasmussen, who teaches early childhood music, pointed me toward some valuable resources. Monica Lopez-Gonzalez, one of my cognitive science TAs, encouraged my development in that type of thinking. My oboe teacher, Jane Marvine, has been incredibly supportive, both in my development as an oboist and in her encouragement for me to look “outside the musical box.” Charles Limb, my mentor and the adviser to this project, has been paramount to my growth not only as a researcher but also as a thinker.

Describe the test battery you created and how the subjects responded to it. The test battery is a child-friendly computer-based test based on the musical education theories of Edwin E. Gordon. This technique presents the child with two different musical stimuli and then asks the child whether they are the same or different. Under the guidance of Charles Limb, I wrote the questions, recorded the stimuli and designed an interface with a “musical animals” theme to keep the children focused and engaged. Surprisingly, many of the children with cochlear implants really seemed to enjoy the music, and mentioned that they listened to music, sang or played an instrument at home. They were more interested, engaged and excited than I would have expected considering how difficult CI [cochlear implant] music listening has been shown to be in adults.

Though preliminary, your findings were presented at a professional conference and may be published. Where do you hope they will lead? I hope research like this stimulates more discussion, further research and ultimately improvement in how those with cochlear implants can perceive music. The more we know about how pre- and post-lingually implanted users hear music—their strengths, weaknesses, differences in devices, training techniques, etc.—the more the music-listening experience can be improved. This test battery could prove a useful tool in discerning these differences. We know music is beneficial on many levels. Why not extend those benefits to those with CIs?

You are also writing an anthropology thesis that you have called “the ethnographic view of my lab work.” What do you mean by that? My anthropology thesis is looking at how those who are deaf and hard of hearing interact with and relate to music. For this research, I have been observing music classes at an elementary school in Rockville with an integrated DHoH [deaf and hard of hearing] program. I observe what the students learn, pedagogical techniques and how the DHoH students react to certain activities. The DHoH students have a variety of devices, and a sign-language interpreter is provided for any class that includes them. This work is a more-qualitative method of learning how DHoH children perceive music, addressing some of the cultural and anthropological questions of the deaf and hard of hearing child’s world.

Do you sometimes feel that there are two Lindsay Scattergoods, the one who plays the oboe and the one who works in a lab? Sometimes I feel like there are many iterations of myself: the classical musician, the lab researcher, the student, the anthropologist. The beginning of the double-degree program felt like two completely different worlds, the conservatory and the university, with a shuttle transporting me between the two. My friends would often tease me about my “other life” at either Peabody or Homewood, of which they weren’t a part. However, in the last couple of years many of my interests have merged together, creating a fascinating and exciting “hybrid self.”

In order to study music perception scientifically, one needs a firm grasp of both quantitative methods and musical theory. As a double-degree student, Lindsay has this, in addition to the personality to be very good working with deaf children with implants. Lindsay’s work is the start of a project of considerable significance. Almost no literature exists regarding the study of children with cochlear implants. Since children possess a high level of neural plasticity and typically are drawn to music, an improved understanding of music perception in children—and how to enhance this perception—is of critical importance so that deaf children may hear even the most challenging acoustic stimuli.