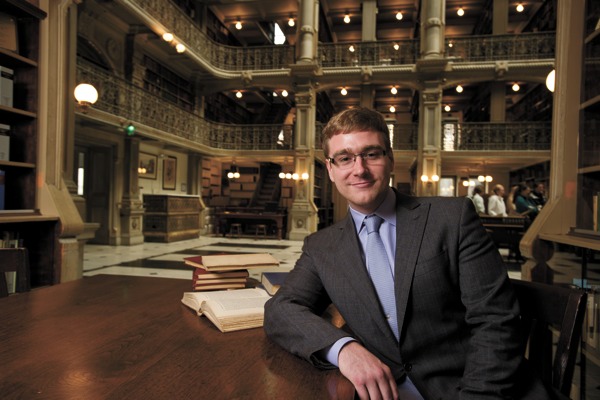 Caleb Johnson headed off to Azerbaijan to explore its sophisticated folk music. Photo: Will Kirk/Homewoodphoto.jhu.edu

Project title: “The Persian Diaspora and Its Effects on Musics of the Middle East”

Caleb Johnson’s original plan was to travel to Iran over winter break, consult an ethnomusicologist at the University of Tehran, and study and transcribe Persian musical scores. After political conditions necessitated that trip’s postponement, the Peabody Conservatory senior instead arranged a weeklong visit to Azerbaijan during the International Mugham Festival in late March. A sophisticated genre of Central Asian folk music, mugham features an ancestor of the violin called the kamancha. In the Azeri capital, Baku, Johnson purchased a kamancha, which has a similar tuning to his own major instrument, the viola (though held between the knees). He also met Azeri musicians, discussed their traditions and recorded their performances.

Many people would find the idea of traveling alone to Azerbaijan daunting. How did you become such an intrepid traveler? I was home-schooled for two years. The first year, my mom took about two weeks to take me around my home state of Missouri. We stopped just about everywhere, from small hamlets to St. Louis. A few years later, she took me on a train trip through 11 countries, crossing Siberia, seeing the Great Wall and taking the longest stretch of straight track in the world through the Outback. I’ve been addicted ever since.

You had lined up some contacts in advance. Was it difficult to expand that network once you were in Azerbaijan? New contacts kept serendipitously falling into my lap. While waiting at a bus stop my first morning in Baku, I met and befriended a violinist from the National Philharmonic who was performing in a mugham concert the following evening. I went with him to the Philharmonic’s orchestra library, where we perused scores that were based on traditional Azeri folk music. Afterward, he introduced me to one of the country’s pre-eminent kamancha players and the president of the Society of Azerbaijan Folk Music Performers, who then gave me a lesson on the new kamancha I had just purchased.

Where did you travel outside the capital? After a couple days, I headed to Shirvan city to record two wonderful mugham performers a Peace Corps volunteer had recommended to me. They were eager not just to play for me but to discuss the intricacies of early Azeri music, the seven different modes associated with it and just how these possibly influenced Western music. My last day in Azerbaijan, I had no appointments, no concerts, no meetings with musicologists, so I headed north to Quba. I had heard this area of the country was exceptionally beautiful, and I was not disappointed. I hired a driver to take me on farther to Khinalug, a village so high in the Greater Caucasus mountains, and so remote, they had their own language spoken only by about 1,500 people.

You also have future plans to spend time in Afghanistan. What would you like to accomplish there, and why? As a high schooler, I had the incredible experience of living and studying at the Interlochen Arts Academy, a small, nurturing environment filled with raw talent and creativity. It made me want to share that discipline and zeal for life with my peers who have not had similar opportunities. In Afghanistan, I would like to start by establishing a small summer music program, and eventually work toward a year-round school. Additionally, a lot of traditional Afghan arts and culture were destroyed prior to 2001. Now that the forces of creation are prevailing over destruction, I would like to be a part of that.

What advice do you have for would-be purchasers of musical instruments abroad? Prior to my Baku purchase, I’ve looked for instruments in Cremona and Casablanca. Do your research ahead of time. Know your price range, speak to some local musicians if you can, and always be prepared to walk away from a sale if you can’t reach an agreement on price. Also, don’t equate age with quality. Lastly, make sure the country doesn’t designate certain types of rare instruments “national treasures” and then try and sock you with a hefty export fee, or prevent you from taking it out of the country altogether.

Studying the influence of Eastern music on European traditions is of profound importance, perhaps more today than ever before. In my musicology classes, we regularly examine some of the surviving fragments of ancient Greek and early Byzantine music. Less is known about music from the Middle East and Central Asia. Caleb’s work combines his knowledge of European music, musical instruments and performance with what he is learning about Central Asian traditional music. While the former relies on texts and scores, the latter depends on memory and oral transmission.