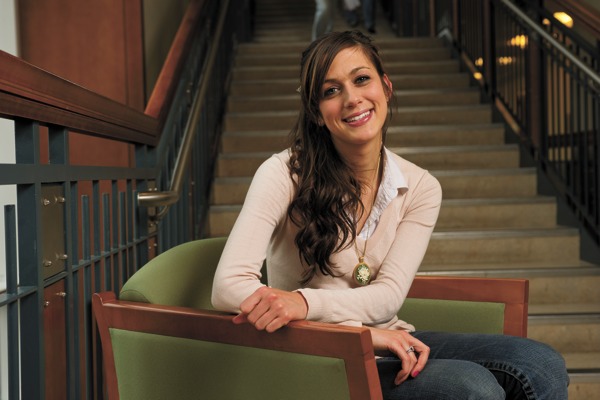 Ashley Chappell traveled to the U.S.V.I. to collect data on vulnerable populations. Photo: Will Kirk/Homewoodphoto.jhu.edu

Project title: “Abuse During Pregnancy Among African-American and Afro-Caribbean Women”

Nursing major Ashley Chappell’s project focused on intimate partner violence among African-American women in the United States and Afro-Caribbean women in the U.S. Virgin Islands during pregnancy. She sought to describe preliminary pregnancy outcomes for women of African descent who have experienced IPV. While it is important to screen for domestic violence in all women, it may be most important during pregnancy. IPV can lead to complications in both the mother’s health and the outcome of the pregnancy.

How many women does IPV affect in this country annually? In the United States an estimated 1.3 million women are abused each year by an intimate partner, and, alarmingly, women who are assaulted during pregnancy have a threefold increased risk of being murdered. Previous research indicates that African-American women have a higher prevalence of IPV compared to females of other ethnic groups.

What are some of the causes for increased IPV among African-American women? Several studies speculate that violence may increase during pregnancy due to economic pressure, body changes, less frequent sexual relations and the woman’s higher vulnerability. The biopsychosocial stresses of pregnancy may also complicate the relationship, leading to frustration and consequently violence.

Who participated in the study?  I screened women of African descent between the ages of 18 and 55 in Baltimore and the U.S. Virgin Islands who completed a 30-minute questionnaire about current and abusive partner characteristics, physical and mental health outcomes, health care utilization patterns, abuse history and sexual risk behaviors.

What results did your study yield? The women in this study who experienced IPV were primarily young, single, low-income, low-education level and more likely to have a history of smoking and drug use. Analysis of labor and delivery statistics showed that those experiencing IPV were significantly more likely to deliver a small for gestational age [SGA] infant compared to those without a history of IPV. It should be noted that SGA is not a synonym for low birth weight, very low birth weight or extremely low birth weight; SGA infants are those whose birth weight, length or head circumference lies below the 10th percentile for that gestational age [the age of the embryo or fetus].

Ashley is one of the most excited undergraduates I’ve worked with and is trying to learn everything she can about research that can truly help vulnerable populations. She was able to conduct a subanalysis of our research being conducted in the U.S. Virgin Islands and Baltimore that is examining the health outcomes of intimate partner violence on African-American and African-Caribbean women that is funded by the National Center on Minority Health and Health Disparities through an Exploratory Research Center mechanism funding the Caribbean Exploratory Research Center at the University of the Virgin Islands.

The PURA award allowed Ashley to travel to the U.S.V.I. to assist in data collection and observe the unique culture of this island territory of the U.S. Importantly, she found that women abused during pregnancy in both settings were significantly more likely to smoke during pregnancy and also were significantly more likely to have a baby who was small for gestational age, an important risk factor for poor infant health. The findings further reinforce the need to assess for abuse at all prenatal visits and at postpartum.