Spacecraft will orbit Mercury 700 times in next 12 months, send data back to Earth. 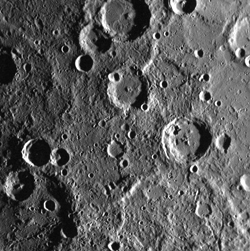 On April 4, Messenger began its yearlong science campaign to understand the innermost planet. The spacecraft will fly around Mercury 700 times over the next 12 months, and its instruments will perform the first complete reconnaissance of the cratered planet’s geochemistry, geophysics, geological history, atmosphere, magnetosphere and plasma environment.

“Messenger’s orbital commissioning phase, which we just completed, demonstrated that the spacecraft and payload are all operating nominally, notwithstanding Mercury’s challenging environment,” said principal investigator Sean Solomon, of the Carnegie Institution of Washington. “We will be making nearly continuous observations that will allow us to gain the first global perspective on the innermost planet. Moreover, as solar activity steadily increases, we will have a front-row seat on the most dynamic magnetosphere–atmosphere system in the solar system.”

Messenger is orbiting Mercury twice every Earth day. Once a day, the spacecraft will stop making measurements and turn its antenna toward Earth for eight hours to send data back—via the Deep Space Network—to the Messenger Mission Operations Center at Johns Hopkins’ Applied Physics Laboratory, which built and operates the spacecraft, and manages the mission for NASA.

Messenger’s 12-month orbital phase covers two Mercury solar days (one Mercury solar day, from sunrise to sunrise, is equal to 176 Earth days). This means that the spacecraft can view a given spot on the surface under given lighting conditions only twice during the mission, six months apart, making available observation time a precious resource.

“The surface mapping observations had to be planned for the entire year far in advance to ensure coverage of the entire planet under acceptable illumination and viewing geometries,” said Brian Anderson, Messenger deputy project scientist, who oversaw the planning for orbital operations.

SciBox—a suite of software tools for science observation simulation—was developed to help the team choreograph the complicated process of maximizing the scientific return from the mission and minimizing conflicts between instrument observations, while at the same time meeting all spacecraft constraints on pointing, data downlink rates and onboard data storage capacity. The SciBox tool simulates the entire year of science observations and identifies the best times to take each type of observation. The commands for each week of observations are derived from this full mission analysis.

For instance, Anderson said, “The remote sensing instruments to measure topography and determine surface and atmospheric composition are fixed on the spacecraft and share the same view direction. Because the ideal viewing directions for these instruments are not the same, we assigned altitude ranges for which the spacecraft pointing is optimized for the science from each instrument.

“The camera has its own pivot, so it has much greater freedom in viewing the surface, and it takes pictures at all altitudes,” he said. “Several other instruments make measurements of local properties, magnetic field or charged particles and acquire excellent data regardless of the spacecraft pointing.”

SciBox works by finding the best opportunities for each of the instruments to make their measurements, and then analyzing how those measurements contribute toward the science goals of the entire mission. “The SciBox tool allows us to plan thousands of science observation activities every week that have to be precisely timed with customized spacecraft pointing,” Anderson said.

The observations depend critically on where Messenger is in its orbit around Mercury, so the final science observation plan was not generated until the spacecraft completed Mercury orbit insertion.

“We had to wait until after Messenger was in orbit before we could start building the actual science sequences because we needed the actual in-orbit ephemeris as calculated by our navigation team to ensure that images and other pointed observations were taken where planned,” said Alice Berman, Messenger payload operations manager.

On March 21, Berman’s team received the first ephemeris following Mercury orbit insertion, a delivery that provided less than two weeks for each instrument payload lead to generate inputs, test them and deliver them to the mission operations team. That team then had to merge those science observation commands with the spacecraft operating commands and fully test the entire package.

For example, the command load for the first week’s observations provided for the acquisition of 4,196 images by the Mercury Dual Imaging System. The MDIS team had to check the commands governing each of those images, and the guidance and control team next had to run detailed software simulations on all the science guidance and control commands for the entire week and then add the nonscience commands, such as those directing solar panel motions and star trackers. Finally, the team re-simulated the full sequence.

“It’s a tremendous amount of work and analysis that has to be done every week,” Berman said. “From our experience with the In-the-Life exercises over the last two years, we determined that we would need three weeks for that process, but our entire team did an outstanding job getting it all done on the accelerated schedule.”

Imaging during the Messenger flybys provided important reconnaissance for the observations from orbit. During Messenger’s first six months in orbit, MDIS will create new higher-resolution global maps of the planet in color and monochrome, acquired under near-ideal viewing conditions.

Emphasis during the second six months will shift to targeted high-resolution imaging with the MDIS narrow-angle camera and acquisition of a second monochrome map but from a different viewing direction to allow stereoscopic analysis of topography. Additionally:

• The Mercury Laser Altimeter will measure the topography of the northern hemisphere over four Mercury years.

• The Gamma-Ray and Neutron Spectrometer and the X-Ray Spectrometer will yield global maps of elemental composition.

• The Magnetometer will measure the vector magnetic field under a range of solar distances and conditions.

• The Visible and Infrared Spectrograph will produce global maps of surface reflectance from which surface mineralogy can be inferred, and the Ultraviolet and Visible Spectrometer will produce time-dependent global maps of exospheric species abundances versus altitude.

• The Energetic Particle and Plasma Spectrometer will sample the plasma and energetic particle population in the solar wind at major magnetospheric boundaries and throughout the environment of Mercury at a range of solar distances and levels of solar activity.

• The radio science experiment will extend topographic information to the southern hemisphere by making occultation measurements of planet radius, and the planet’s obliquity and the amplitude of the physical libration will be determined independently from the topography and gravity field.

“The engineering teams accomplished an astonishing achievement by developing, launching and guiding Messenger through the inner solar system and safely placing the spacecraft in orbit about Mercury,” Anderson said. “Now the science planning teams are working hard to take full advantage of this unprecedented opportunity to learn everything we can about Earth’s heretofore enigmatic sibling planet.

“With thousands of science observation commands to plan, test and verify every week, not to mention the need to verify that the observations are successful, we certainly have our work cut out for us,” he said. “But we have the tools, the people and the processes in place to do the job. So far, everything is going just the way we planned.”