Probing the mystery of our ‘working memory’ 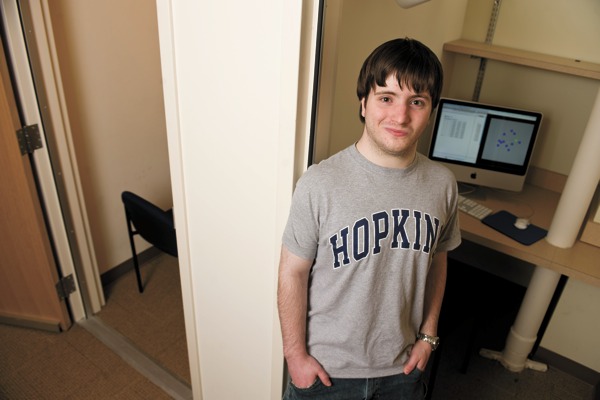 Project title: “The Capacity and Quality of Spatial Working Memory”

A self-proclaimed “numbers guy,” junior Matthew Levine doesn’t have any trouble remembering phone numbers or addresses. But introduce him to a few new people at a party, and he may have forgotten their names before the handshake is even over. It’s these variations in short-term memory—what neuroscientists call “working memory,” because we use it on a daily basis—that inspired Levine to design a PURA study that would investigate the factors that affect our working memory, allowing us to, say, remember an email address but quickly forget a face or a name.

Tell us a little about working memory. What do we use it for, and why does it matter? Working memory is essential for everyday activities, such as memorizing a phone number or email address, as well as more important activities, such as driving. Basically, working memory gives us the ability to retain a limited amount of information for a short amount of time. Research tells us that we humans seem to be able to remember via our short-term memory only three or four things or objects at a time, and that’s not very much, if you think about it.

There are several possibilities in respect to what affects the quantity and quality of our working memory and what we can remember and for how long. One is that we have a finite number of “slots” in our working memory, but that each of those “slots” has its own resolution. The other is that though we have limited “space” in our brains for working memory, which we can either divide generously among a few things—leading to clearer ability to recall those fewer facts—or poorly among many things, with the result being a fuzzy recall. My research was mostly driven by a hypothesis that individual memories do not get less clear as we acquire them; they are just more likely to get confused with other memories the more memories we acquire. So I set out to test this idea.

How did you go about testing your theory? The critical thing was to be able to measure the quality of individual memories and the number of memories a person stored independently. I created a MATLAB [matrix laboratory] computer program that measures a person’s performance on two tasks. Basically, the research subject saw several objects in a display, and some of them flashed, identifying them as targets. A gray screen then appeared, and the subjects were asked to do one of two things: Half of the time, one of the flashing targets disappeared, and the subject had to select where the missing object should be; the other half of the time, the subject just had to identify which objects were flashing previously. A second task also showed the subjects flashing objects, but they didn’t disappear—they just stopped flashing. The subject then had to click on all of the objects that had been previously flashing.

What did you find out? We found something that we think is kind of surprising: We found that as a person needs to remember more things, each individual memory does not degrade, or go down, in quality. We all have an intuitive sense that memory works like any commodity—you use it one place and you can’t in another. But we discovered that it does not really work that way. When we measured the quality of individual memories, we found that they were stable no matter how many things a person was asked to remember. So in our experiment, people’s sense of where an object was located did not get “looser” the more objects they had to remember. So then the question is, Why does it seem like people can only remember so many things? What we found is that the more people need to remember, the more likely they are to rely on the wrong memory to make a decision. So if you want to find object A, you need to consult your file about object A. The more files people store, the more likely they are to consult the wrong one.

Do you think of yourself as having a good short-term memory? What, in your own life, do you have the most trouble remembering? It’s actually very difficult to measure my own working memory abilities on my experiments; since I was the one who programmed them, I tend to do unusually well on them because I know the overarching structure of how the program is organized, which gives me an unfair advantage. But in everyday life, I find that I can remember numbers more easily than I can remember strings of letters.

Matt came up with some clever ways of exploring the relationship between two aspects of spatial memory that are rarely studied together: capacity and quality. Matt’s ideas and experiments have “real world” significance because working memory deteriorates with age, as a result of stroke and as a result of various kinds of disorders, such as Alzheimer’s. But the thing is, an underlying deterioration in either quality or capacity, or both, could have the kinds of impacts we typically observe. So if we are going to really understand what happens when working memory falls apart, we need more sensitive ways of measuring the capacity and quality of working memory, and also some understanding of how they relate generally. Matt’s work starts us down these paths.