The Civil War at 150: A JHU perspective 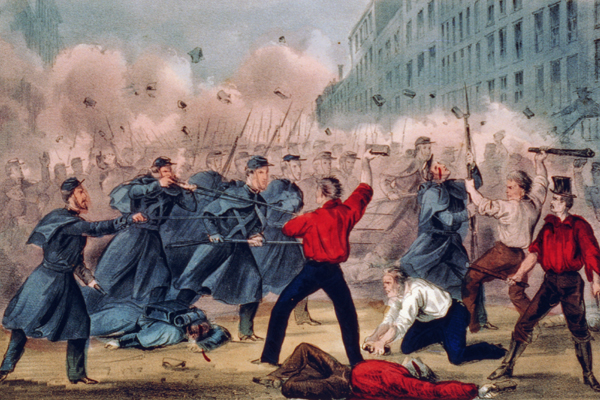 Illustration of Baltimore Riots that took place on April 19, 1861. Credit: Library of Congress

Five days after the Union garrison at Fort Sumter surrendered to Confederate troops, the Civil War erupted in Baltimore. Massachusetts militia, passing through the city en route to the nation’s capital, were fired on by Confederate sympathizers as they approached their railroad station destination. The bullets and resulting havoc left 16 dead and many more wounded. Historians regard the April 19, 1861, skirmish—dubbed the Pratt Street Riot—as the first bloodshed of the four-year conflict.

To commemorate the 150th anniversary of the onset of the Civil War, The Johns Hopkins University will recall the battle of North vs. South in an online multimedia project in which faculty, JHU Press authors and editors, alumni and others will share their expertise on the war and its place in history.

The project launches at perspectives.jhu.edu/civilwar on April 12, the anniversary of the 1861 siege of Fort Sumter, and new postings will appear in the coming months.

Civil War Perspectives will feature video interviews on a range of subjects that include Johns Hopkins’ family history of abolitionism, the battle of Antietam, the geology of Gettysburg, the treatment of battlefield injuries, and political cartoons. A historian will examine the role of women and nurses during the war, and the former director of JHU Historic Houses will look at Baltimore’s sculptures and monuments related to the war.

Several subjects tie into Maryland’s and the university’s history, as in the case of the Pratt Street Riot. To stem the weeks of violence that followed, Baltimore Mayor George William Brown and Maryland Gov. Thomas H. Hicks implored President Abraham Lincoln to halt passage of Union troops through the state. Brown, later imprisoned at Fort McHenry for his pro-Confederate stance, would nine years after the war serve as a founding trustee of The Johns Hopkins University.

The project is being created by the university’s Office of News and Information.