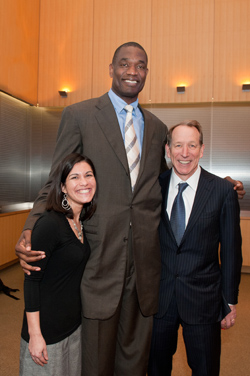 The Johns Hopkins Bloomberg School of Public Health has presented the Goodermote Humanitarian Award to NBA legend Dikembe Mutombo for his efforts to reduce polio globally, and for his work improving the health of neglected and underserved populations in the Democratic Republic of the Congo. Mutombo received the award at a ceremony held at the school on April 13.

“Mr. Mutombo is a winner in many ways—on the court and as a humanitarian. His work has improved the health of the people of the Democratic Republic of the Congo, and the Biamba Marie Mutombo Hospital and Research Center is a model for the region,” said Michael J. Klag, dean of the Bloomberg School. “Likewise, Mr. Mutombo has been instrumental in the fight against polio by bolstering vaccination efforts and bringing treatment to victims of the disease.”

A former all-star and the NBA’s first Global Ambassador, Mutombo began his career in 1991 as a center for the Denver Nuggets. He went on to play for teams in Atlanta, Philadelphia, New Jersey and New York before retiring in 2009 as a Houston Rocket.

A native of the Democratic Republic of the Congo, Mutombo came to the United States on an academic scholarship to attend Georgetown University in Washington, D.C., and during his second year was invited to try out for the basketball team. After becoming a player, he redirected his pre-med ambitions and graduated with degrees in linguistics and diplomacy.

Mutombo has long been dedicated to improving the health, education and quality of life for the people of Congo and globally. The Dikembe Mutombo Foundation was created in 1997 to eradicate childhood diseases that have virtually disappeared in developed countries, as well as to improve health outcomes in Congo.

The first recipient of the Goodermote Award was CNN anchor Soledad O’Brien, who was honored for her coverage of Hurricane Katrina and the 2004 Asian tsunami.

In addition to creating the award, the Goodermote family has established a scholarship for students studying international health who are committed to addressing the needs of displaced people and to furthering the mission of the Center for Refugee and Disaster Response.