Woodrow Wilson fellows will share their findings at Friday event 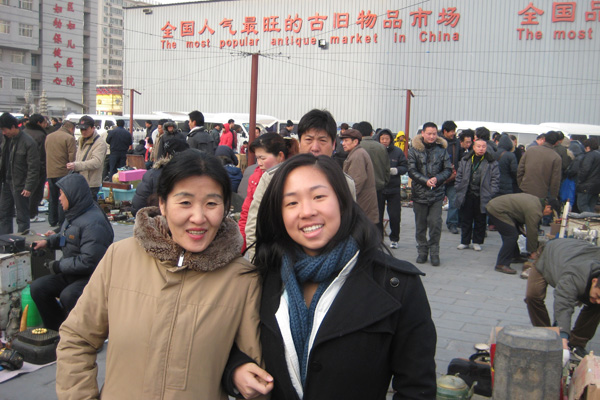 Before Karen Hong left for college, she and her parents didn’t discuss sex—at all. Hong, in fact, recalls the many awkward moments in the presence of her parents when television or movie characters just kissed on screen. Bedroom scenes? Off-limits.

However, Hong’s interest in sexual health issues as a public health studies major at Johns Hopkins would eventually lead her to broach the taboo subject with her mom, a native of the Fujian Province in China, who came to the United States in 1984.

“I remember one time I asked my mom, How do you say sex in Chinese?” Hong said. “She was like, I don’t know. We usually just say ‘it’ or ‘that thing.’” They ultimately had to consult a Chinese/English dictionary.

Hong, from Santa Rosa, Calif., wondered if modern-day Chinese youth still clung to this unwritten gag order on sexual topics and, if so, what impact the cultural attitude had on sexual health. She would find the answer and more thanks to a Woodrow Wilson fellowship award she received her sophomore year.

Since 1999, Woodrow Wilson fellowships have allowed undergraduates in the Krieger School of Arts and Sciences the opportunity to pursue an independent research project over the course of their college career. Hong is one of 19 seniors who on Friday, April 29, will discuss the results of their research at a poster session to be held from 3 to 6 p.m. in Homewood’s Glass Pavilion.

Subjects of other Woodrow Wilson projects on display at the Friday poster session include an assessment of a high-speed rail system across the United States; the potential for tobacco cessation clinics in a poor community in Cape Town, South Africa; bureaucratic barriers to health care in Baltimore; and a fantasy-tinged play written, produced and directed by a fellow and staged in Chicago.

Hong, during her junior year, studied abroad at Peking University, where she conducted a survey of 176 students on their sexual health knowledge and the associated cultural stigmas and access to care. The survey found that a large majority of students knew only one of the four modes of HIV transmission. When students were asked how they would feel if they found out a friend was HIV positive, nearly 70 percent of respondents said that it would have a severe or somewhat negative effect on their friendship. Only three students reported ever using sexual health services at a clinic or hospital.

In addition to conducting the university-based survey, Hong found time to venture into China’s countryside to research reproductive health and the impact of the nation’s one-child policy, and soak up as much of the culture as she could. As in years past, the Woodrow Wilson awards let students not just explore topics but explore the world.

Hong said she was somewhat surprised to uncover just how uninformed Chinese college-age students were about HIV and other sexually transmitted diseases.

“Not only could they not pick out the actual ways to transmit HIV from one person to another, they picked out modes that were incorrect, like hugging or sharing food,” Hong said. “There is a lot of misconception out there and a lot of negative attitude toward HIV-infected individuals.” 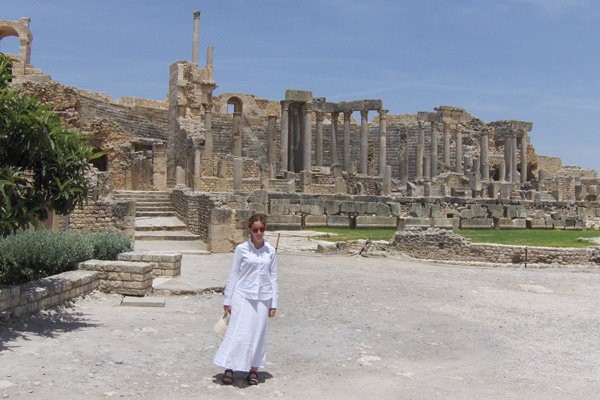 Lena Denis in Dougga, an ancient Roman city in northern Tunisia that is now a UNESCO World Heritage Site. Behind her is the town’s amphitheater. The remote city, one of the best-preserved Roman cities in existence, was hidden behind a rock outcropping so that invaders couldn’t find it easily. Denis took a three-hour ride, in two taxis, from the nearest city to get there. Photo Courtesy Lena Denis

She witnessed the stigma firsthand when she visited a health clinic in Beijing. Doctors she spoke with said they could easily pick out who was there for HIV testing—they would be the individuals who waited until everyone was gone from the waiting room to ask to be seen.

“In China, not everyone comes in with an appointment,” she said. “And when you’re standing in line, you have to tell the person what you’re there for. When they do the testing, everyone else can see.”

Many primary and secondary schools in China strongly discourage students from having sexual or even romantic relationships, Hong said. Sexual education is taught in middle schools, but Hong learned that most of the teachers are embarrassed to discuss the subject in class and assign the related chapter at home. Hong said that while many students knew the word for sex, the topic was not discussed openly outside of sexual education courses taught in college.

Hong said that the ramifications of this lack of knowledge and discourse could mean a steady increase in HIV and STD transmission.

“I think there needs to be more dialogue, and students need more information on how to access resources,” she said. “Out of the people I surveyed, only 2 percent actually use sexual or reproductive health services if they do need them, which I found shocking. Even if people weren’t admitting to me that they were going, it’s still likely a very low number.”

Speaking of what she learned, Hong said that the experience has given her a newfound confidence.

“I feel that now I’m much more open to ask questions and reach out to people,” she said. “I’m not afraid to go after what I want. I also realize you don’t need a PhD to explore what you’re interested in. You can start right now.”

The annual Woodrow Wilson Undergraduate Research Fellowship Program allows students to delve into unconstrained research during their undergraduate experience, mentored by a faculty member. Each Wilson fellow receives a grant of $10,000 to be distributed over four years to support research expenses, including costs associated with travel, equipment and use of archives.

The fellowships are given to incoming freshmen of outstanding merit and promise and also to rising sophomores, who receive $7,500 for three years. For high school seniors, a Woodrow Wilson brochure is included in the application packets mailed out by the Office of Undergraduate Admissions. Current freshmen, however, must submit a two-to-three-page proposal, a resume, a second-semester transcript and a letter of recommendation from a JHU faculty member who would become the student’s mentor.

The award is named after the former U.S. president, who received his doctorate from Johns Hopkins. The program was developed for the School of Arts and Sciences by Herbert Kessler, then dean of the school and now a professor of art history; Steven David, vice dean for undergraduate education; and university trustee J. Barclay Knapp, who funded the fellowships through the school’s James B. Knapp Deanship, named for his late father. Recipients have gone on to win Rhodes, Marshall, Fulbright and Truman scholarships.

The individual research projects are designed by the fellows, and each student has the choice of focusing on a single long-term project, exploring several aspects of a particular discipline or working on various short-term undertakings in an array of fields. Students can opt to pursue research in their own major or, if they wish, branch off into a totally unrelated discipline.

Lena Denis stuck to her major for her research on a terra cotta tile from the university’s Archaeological Museum.

Denis, who is majoring in anthropology and history of art, wanted to trace the tile’s iconography and material to figure out where and why it was created. Her research required her to travel through Europe and North Africa, in addition to many hours of source reading.

The roughly 10-by-12-inch tile depicts a stag drinking water from perhaps a stream or river. She came across the piece during her work at the Archaeological Museum, where she helped inventory many
objects.

Eunice Maguire, then curator of the Johns Hopkins Archaeological Collection, told Denis that not much was known about the tile and that she would love to learn more.

Denis leapt at the chance for some detective work.

She went in knowing that the object was acquired by Harry Langford Wilson, a professor of Roman archaeology and epigraphy who obtained more than 1,000 Etruscan and Roman artifacts for the university’s collection between 1906 and 1909.

During the summer after her junior year, Denis traveled to London to visit the British Museum, which holds a wealth of mosaics and terra cotta pieces. There she spoke with curators to discuss the tile’s stag image and material. She conducted similar research at the Louvre Museum in Paris.

She would later travel to Tunisia, an area renowned for its terra cotta manufacture. She visited the ruins of Carthage, where she made a major breakthrough in her work.

“I was standing in this chapel, and so many of the tiles set into the walls had deer images on them,” Denis said. “I was delighted.”

She now believes the tile’s image demonstrates an important iconographic and stylistic shift in Early Christian art, one that ultimately influenced the early church’s theological understanding of salvation. As for where and when the tile was manufactured, Denis said it was likely made sometime in the fifth or sixth century in Italy.

Denis said that her Woodrow Wilson experience confirmed what she wants to do the rest of her life: more of this same type of work.

“I loved this opportunity to delve into world history and help understand religious works of art,” she said. “And it was such a great experience to do this travel.”

Steven David, who is director of the Woodrow Wilson fellowship awards program, said that many fellows describe the research experience as their “defining moment” at Johns Hopkins.

“They fully appreciate the opportunity to do these projects and get to know faculty that much better,” he said. “The experience also helps them in their future endeavors. For one, they stand out among graduate school applicants since they’ve had this opportunity to conduct a well-defined research project as an undergraduate. It just opens doors.”

For current freshmen, the deadline for fellowship applications is May 13. For more information, go to www.jhu.edu/woodrowwilson.