Elaine Tuttle Hansen will assume her post at JHU on Aug. 1 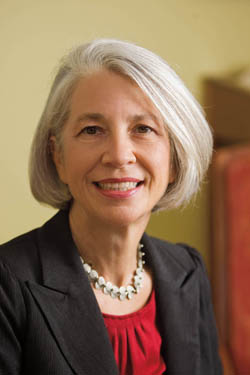 Elaine Tuttle Hansen, president of Bates College and an accomplished scholar, educator and leader, has been named executive director of The Johns Hopkins University’s Center for Talented Youth.

Hansen will step down from the presidency of the Maine college in July after nine years and start her new position Aug. 1. She will succeed Lea Ybarra, who has led CTY for nearly 14 years, a tenure marked by incredible growth and the enhancement of the center as one of the most successful educational programs in the world for academically gifted primary- and secondary-school children.

“I consider it a real privilege to be joining the outstanding Center for Talented Youth and the amazing research institution with which it is affiliated,” Hansen said. “The center itself is a place of such excellence with a mission consistent with what I have spent my whole life doing, and that’s how I knew that this next step was the right fit for me.”

CTY is an arm of Johns Hopkins that finds exceptionally able primary- and secondary-school students and supports them with challenging advanced courses and other programs, both in person and online. In 2010, it enrolled more than 26,000 students in summer residential classes and year-round online courses, bringing to more than 444,000 the number of talented second- through 12th-graders it has served since 1979.

Hansen’s appointment caps a national search by a universitywide committee for a highly accomplished leader who values academic excellence and embodies the ideals of the university and CTY, said Lloyd B. Minor, the university’s provost and senior vice president for academic affairs. In Hansen, the university has found a scholarly administrator who has

spent much of her career developing and nurturing academic talent in young people, he said.

“Elaine Hansen is a proven academic leader with a long-standing commitment to undergraduate education,” Minor said. “She brings a wealth of experience and an invaluable perspective to CTY and to the university. I have been deeply impressed by Elaine and her vision for CTY, and I am thrilled that she will be joining Johns Hopkins.”

President Ronald J.  Daniels said that Hansen’s experience as a college president, provost, professor, fundraiser and fiscal, facilities and student life manager positions her to take on the opportunities and challenges that face CTY.

“Dr. Hansen is a seasoned, mature, experienced leader of a complex organization with myriad stakeholders,” Daniels said. “We see her bringing all of that and her academic credentials to CTY and engaging the community in the kind of strategic planning that has made her so successful at Bates and throughout her career.”

In a message announcing Hansen’s departure to the Bates community, Michael Bonney, chair of the college’s board of trustees, described Hansen as an inspirational leader whose contributions to the college will be felt by generations of future Bates students, faculty, staff and alumni.

“Elaine has managed the college with skill and determination through the most turbulent economic times in recent memory,” Bonney said. “My fellow trustees and I are deeply grateful for her adroit leadership, which ensures that the college has the financial resources to support its strong and exciting future.”

In her new role, Minor said, Hansen will be charged with leading CTY to new levels of local, national and global impact as the program seeks to expand learning opportunities for academically talented students in primary and secondary grades throughout the country and internationally. She will report to the provost, directing a staff of 180 full-time employees, 220 part-time employees and 1,600 summer programs employees, and managing a budget of more than $50 million.

Minor said that Hansen also will work closely with David Andrews, dean of the School of Education, to build a collaborative research program focused on talented youth.

“I have been inspired by my conversations with Dr. Hansen,” Andrews said. “Her vision for collaboration in strengthening research and building strong programs for talented and gifted students aligns perfectly with our aspirations in the School of Education, and I am excited about the important work we will do together.”

Vice Provost Pamela Cranston, who led the search committee, said that Hansen will inherit a program that is fundamentally strong and uniquely poised to be a leader in today’s debate on gifted education.

“Given the changes in leadership and technologies, we believe that Dr. Hansen is in the best position to elevate CTY’s role in the discussion of gifted and STEM education,” said Cranston, referring to the disciplines of science, technology, engineering and mathematics.

Ybarra announced in October that she would leave CTY after her successor was appointed and took office. Among her major accomplishments have been strengthening CTY’s budget, diversifying its student body and staff, and raising the program’s national and international footprint.

“Under Lea’s leadership, CTY has played an important role in identifying and developing the academic talent of young students across the country and around the world,” Minor said. “What CTY does is inspiring, and what Lea has achieved is remarkable. We are deeply grateful for her vision, passion and service to Johns Hopkins.”

Hansen is the seventh president of Bates since its founding in 1855. She earned her bachelor’s degree at Mount Holyoke College, her master’s degree at the University of Minnesota and her doctorate at the University of Washington. Before going to Bates, Hansen served as provost and professor of English at Haverford College. She also has been associate editor of the Middle English Dictionary at the University of Michigan and taught at Hamilton College. Hansen has received research grants from the National Endowment for the Humanities and the American Council of Learned Societies, and earned support from the Whitehead and Mellon faculty development funds. She has published numerous literary critical articles and reviews, and three books: Reading Wisdom in Old English Poetry (University of Toronto Press, 1988), Chaucer and the Fictions of Gender (University of California Press, 1992) and Mother Without Child: Contemporary Fiction and the Crisis of Motherhood (University of California Press, 1997).

Hansen, the mother of two adult daughters, said that she and her husband look forward to moving back to the mid-Atlantic region, where they previously lived for 22 years.