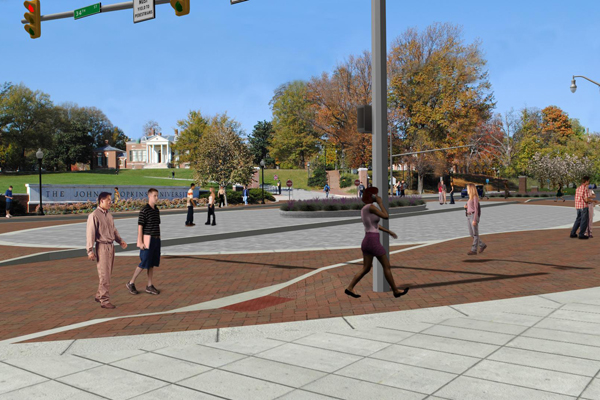 An artist’s rendering of the pedestrian-friendly ellipse on Charles Street between The Beach and Wolman and McCoy halls. Photo: RK&K

Baltimore City’s Department of Transportation has green-lighted a major reconstruction and beautification of the North Charles Street corridor near the university’s Homewood campus—a project more than 10 years in the planning stages.

The three-year  $25 million endeavor will serve many goals, primarily to enhance pedestrian safety, foster more rational traffic patterns, upgrade 100-year-old infrastructure under the roadway, improve signage, accommodate bicycles and generally upgrade the character and appearance of the area from 25th Street to University Parkway. The lion’s share of the work will be conducted from 29th Street northward, the stretch of Charles Street that runs roughly the full length of the Homewood campus.

Preliminary work will commence this summer with completion expected to occur in summer 2014. The four-seasons Optical Gardens art plaza, which will stretch from 33rd to 34th Street, along the sidewalk from Charles Commons to Wolman Hall. Photo: Haddad i Drugan

Johns Hopkins, the Baltimore Museum of Art and several Charles Village community groups have been an integral part of the design process.

Jamie McDonald, project manager and an engineering supervisor with the Department of Transportation, calls the project a “massive endeavor” and one of the largest streetscapes the city has done in recent years.

“This project has it all,” McDonald said. “It’s as heavy work as we have currently going on in the city.”

McDonald credits Johns Hopkins’ involvement with resuscitating an effort many considered to be on life support just two years ago.

Baltimore City initiated studies to reconfigure this area of North Charles Street back in 1999. The city unveiled a design plan in 2002, but several institutions and organizations expressed concern that it needed to better address pedestrian safety and traffic calming. What followed were many years of delays, due to either budgetary constraints or design conflicts.

The city would eventually qualify for $20 million in federal funding but needed to match its own $2.5 million investment to secure the funds. The university stepped in, not only financially but to help coordinate other stakeholders.

“Without the support from Johns Hopkins, this project would never happen,” McDonald said. “They saw the need to make this stretch of Charles Street safer for pedestrians and bicyclists, and maintain its efficiency for vehicles.”

The project will be advertised publicly in July to solicit the interest of qualified contractors. It is expected that competitive bidding will take place through August with the winning bid announced this fall. Barring unforeseen developments, the reconstruction is expected to begin in November.

The scope of the work from 29th Street to University Parkway will be far greater.

The roadway will be completely altered from its current configuration to become a boulevard with two lanes northbound and two lanes southbound separated by a wide landscaped median. In order to slow traffic flow, only one lane in each direction will be open to vehicles outside of morning and evening rush hour periods.

The east side of Charles Street will feature a wider service lane than the existing one to provide the needed amount of parking for area residents.

There will be more crosswalks, highly articulated with traffic signals and visual countdown timers, complete with audible signals for the sight-impaired.

The hazardous, sweeping turns at Art Museum Drive and at 29th Street will be eliminated and replaced with 90-degree turns and signal lights to ensure safer pedestrian crossing at points where vehicles don’t always fully stop.

A large ellipse will be created in the center of Charles Street between the university’s Wolman and McCoy halls and The Beach, at the intersection of Charles Street, 34th Street and Greenway. This ellipse, which will feature red brick pavers and a central planting bed, will function as one large pedestrian crossing signaled at both ends. Also to be installed in this area are tall pilasters that borrow architectural elements of the campus.

The overall design also includes provisions for bicycle lanes and for accommodating a proposed Charles Street trolley at a later date.

As part of the reconstruction project, an art plaza has been envisioned from 33rd to 34th Street, along the sidewalk from Charles Commons to Wolman Hall. This art project has been managed jointly by RK&K, the Baltimore Public Art Commission, the Baltimore Office of Promotion and the Arts, and the Department of Transportation in partnership with community stakeholders.

More than 200 artists and studios applied for the job, which was eventually won by the Seattle-based studio Haddad|Drugan.

The winning design is called Optical Gardens and will contain four seasonal “rooms,” each of which will include seasonally appropriate plantings, lighting and carved stone images. The rooms will be visually connected by three stainless steel optical rings and by a stone channel to carry storm water north to south. The rings will vary in size, from large to small, designed to reference a telescope (if viewed from the north looking south) or a microscope (looking south to north).

Lighting will further unite the rooms, with white tree lights year-round and colored spotlights focusing on the room garden of the current season—blue for winter, pink for spring, green for summer and orange for autumn.

The design was inspired by elements of Johns Hopkins and the surrounding community such as the Stony Run stream valley, the Space Telescope Science Institute and the university’s history of scientific advancements in water filtration. Included will be stones and pebbles that honor the late M. Gordon “Reds” Wolman, a longtime professor in  the Department of Geography and Environmental Engineering at Johns Hopkins, who was an internationally respected expert in river science, water resources management and environmental education.

The art plaza, funded by the city’s 1% for Public Art Program, is to be installed in fall 2012.

All new trees, selected for their ability to survive and flourish in the city’s climate, will be planted on both the east and west sides of Charles Street and in the medians for the entire length of the reconstructed area. Other new landscape treatments include ground cover, shrubs and seasonal floral plantings installed at crosswalks and at the project “gateways” of 29th Street and University Parkway.

All new lighting fixtures will be installed for both roadway lighting and along sidewalks for pedestrian safety.

To get from start to finish, however, there will be some inconveniences.

Charles Street will be closed to through traffic from 29th Street to University Parkway for the duration of the project, likely beginning at the start of the project in November. A detour will be created.

All existing trees must be removed to allow for the underground utilities work and the reconfiguration of the roadway and repositioned medians.

Provisions will be made in various locations for residents with Area 12 Residential Parking Permits to have parking during the project. These locations will be moved from time to time to accommodate the progress of construction. Nonresidents will not be allowed to park on the street in this area.

“Pay to park” spaces on Charles Street will be eliminated at the start of the project and will not be replaced.

Pedestrian crossings will be put in place at five locations: 29th Street, 31st Street, 33rd Street, 34th Street and University Parkway, and there will be fencing to both channel pedestrians to safe crossing points and to prevent inadvertent entry into construction work areas. These crossings will be moved slightly to the north or south of each point to accommodate construction as it progresses.

During the main part of the reconstruction, the Department of Public Works will replace a 100-year-old water main. The new service will be installed along the entire length of the construction limits, with laterals from the new mainline to individual buildings. These connections will be planned and scheduled with building occupants. DPW will work out details of the schedule with JHU’s Facilities Office and other private-building owners.

The installation of the new BGE gas line this summer will require similar logistics, and meetings will be scheduled with JHU’s Facilities Office and others to work out the details. The gas-line work from 29th Street to University Parkway will commence in June and conclude before November.

Larry Kilduff, the university’s executive director of Facilities, said that he hopes that the Johns Hopkins community will be patient throughout the construction period. Briefings for Homewood campus entities impacted in some way by the reconstruction will be held in May.

“After the long and complicated reconfiguration and other upgrades and improvements are complete, the end result will be a dramatic change at our front door and one that will complement the prestige and character of JHU’s beautiful Homewood campus,” he said.